Minus actions of genesis: Unconstruction #3

Minus actions of genesis: Unconstruction #3

The basic principle behind the work was to project a text onto a certain compartment of space, without the text becoming visible on the surrounding walls of that space. The projected sentence, truth lies beyond this space, is only readable because the focus point of the slide projector in use is set to be in that particular space. Beyond this point in space, the text becomes harder to read due to it being out of focus. Furthermore, the sum of 4 construction lights with a combined power of 2000 Watt create a virtual canvas of light on the surrounding wall into which the projected text disappears. The sentence is wiped-out as it were.

Due to the space being only filled with air, e.g. transient to light, the text is not visible at all, unless a visitor is present in front of the projector, more or less in the focus point of the projection. The body of the visitor acts as a projection screen unto which part of the text appears. As the area of projection is larger than the human body, the visitor needs to actively block the light in the whole area in order to read the sentence. The latter was usually achieved by using one’s hand and following the orientation of the sentence.

The result was an almost physical experience of light and text. But this could occur only after the visitor discovered the actual presence of the hidden message, something that was not immediately obvious to the visitor. Often the visitor wandered around almost aimlessly in what appeared to be an empty space, a void devoid of meaning and energy. Even while standing right in front of the slide projector and having the sentence projected onto their bodies, the message was often not revealed to them, unless a second visitor following the game at hand pointed it out to the other.

The work was exhibited at Souterrain Amsterdam as an installation consisting of 2 similar setups opposite of each other, each containing 1 slide projector equipped with only 1 slide showing the aforementioned sentence and 4 strong lights eliminating the sentence again. The projectors were placed in the middle of the room on 2 white pedestals, each pointing at the opposite wall. The combined power of more than 5000 Watt was extracted from 2 plugs.

As part of the accompanying publication, ‘A body presented to you and me’, the poem ‘A body’ was written:

A body, does it exit I wonder,
I, who is conscious of its other part,
as in he who is not I.
Then again, it is me,
for now I am in it,
for a moment in time,
a constellation of constellations
of constants and variables,
spinning, pulsating,
binding emptiness to impenetrable fields of probabilities.
In this mirror of energetic reflections
a diffuse image emerges,
transient to the inside,
colligated to the outside.
Here is where it brought me,
stretching its hand,
my hand, towards you,
in a gesture of willingness,
to share, a will,
my will,
just before or after he decided it,
we meet again,
here and maybe now.

The Principle
It started with a word. For weeks it kept haunting me, making life just mere thought. Then a vision emerged, an image of lines and spaces seemingly unrelated to the word. A puzzle of unmatchable pieces whose ultimate shape was yet to be defined. In a frantic search for meaning I reassembled the pieces together in a multitude of combinations, creating and destroying obscure shapes with transient outlines, when suddenly it struck me.

Would it be possible to create a work by not creating it? Not in a passive sense, e.g. not doing anything, and then miraculously hoping for meaning to occur, or as some form of escapism for failure, a principle I am all too familiar with. But would it be possible to not create a work in an active way, ‘not creating’ as part of the concept of creating, how absurd this might seem.

It seems quite preposterous, a philosophical play with words that serve no other meaning than to obscure, but are we not familiar with several forms of non-constructions, or unconstructions? The perception of silence can only be experienced when no sound is made, it cannot be created by itself. It is through the absence of its counter-part, e.g. noise, defined and only in relation to this other quality does it materialize. As such silence could be considered as unconstructed sound. Immediately the question arises if you could have degrees of silence, like in the expression a deafening silence, and with what implications?

Some other concepts that could be considered as unconstructions are black, void, death, god or more art specific: space. Though used as an expression, the quality space cannot be created physically. Only through the absence of (physical or logical) entities within set boundaries can we define its properties. A square can be drawn on a piece of paper and with this action two spaces materialize, an inner space inside the square, and an outer space, though the latter is actually also some form of inner space as it is confined by the physical size of the paper. The quantity space itself is never created, only through its division is ‘new space’ defined, but not more as in more of it, but more as in more of the same. Maybe this is also one of reasons why it is so hard to grasp the concept of an expanding universe, or a universe that existed at time zero when space was confined to an infinite singularity. Because in what is the universe expanding to, if it is not confined or divided by some element? What is beyond the outmost borders of our universe? More space? Spaceless space?

Another way of looking at the unconstruction is the idea that it exists through its non-existence. Space and silence only exit through their opaque quality. In a way they are literally ungraspable, transparent, intangible and only in a reference conceivable. If the concept of silence was non-existent, one would still be able to perceive sound and its variations. Even at very low volumes, its common denominator would still be audible, as if moving towards an asymptote of no sound but never reaching it. Never being able to really understand what silence means, always surrounded by background noise. It is in this abstraction of infinity that the key and inherit failure to understanding lies.

In the stated examples a clear action can be defined of which the outcome is the unconstructed quality itself or the absence of the action constructs that quality. In case of silence it is the conscious action of not making any noise that produces the silence, whereas with space it is the defining negative action that creates it. Could the same minus-action-of-genesis principle be applied to a work of art and how would such an action look like? What are the conditioned needed to create such a non-existence, and to what effect on the space, the presented works and the visitors in that space? 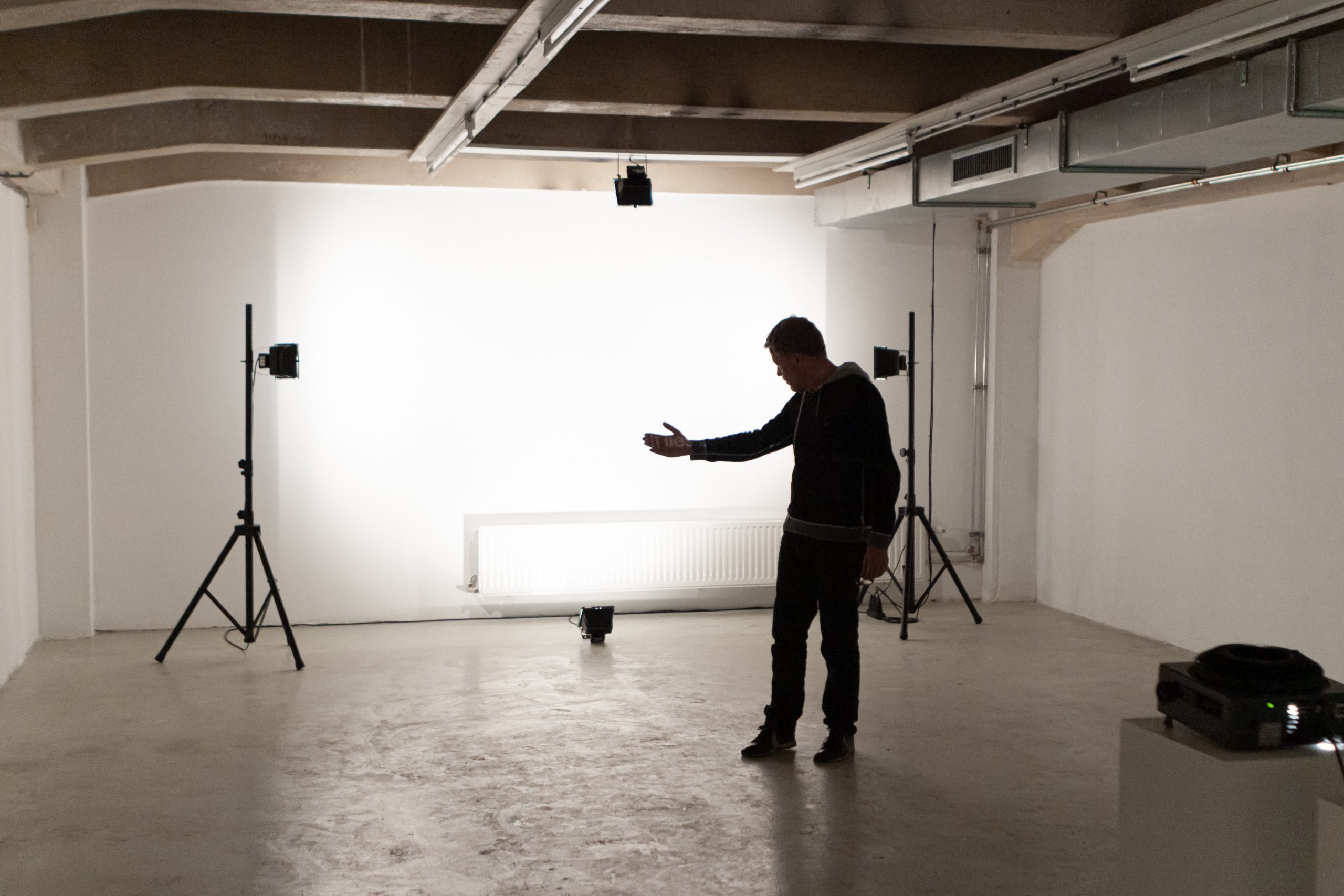 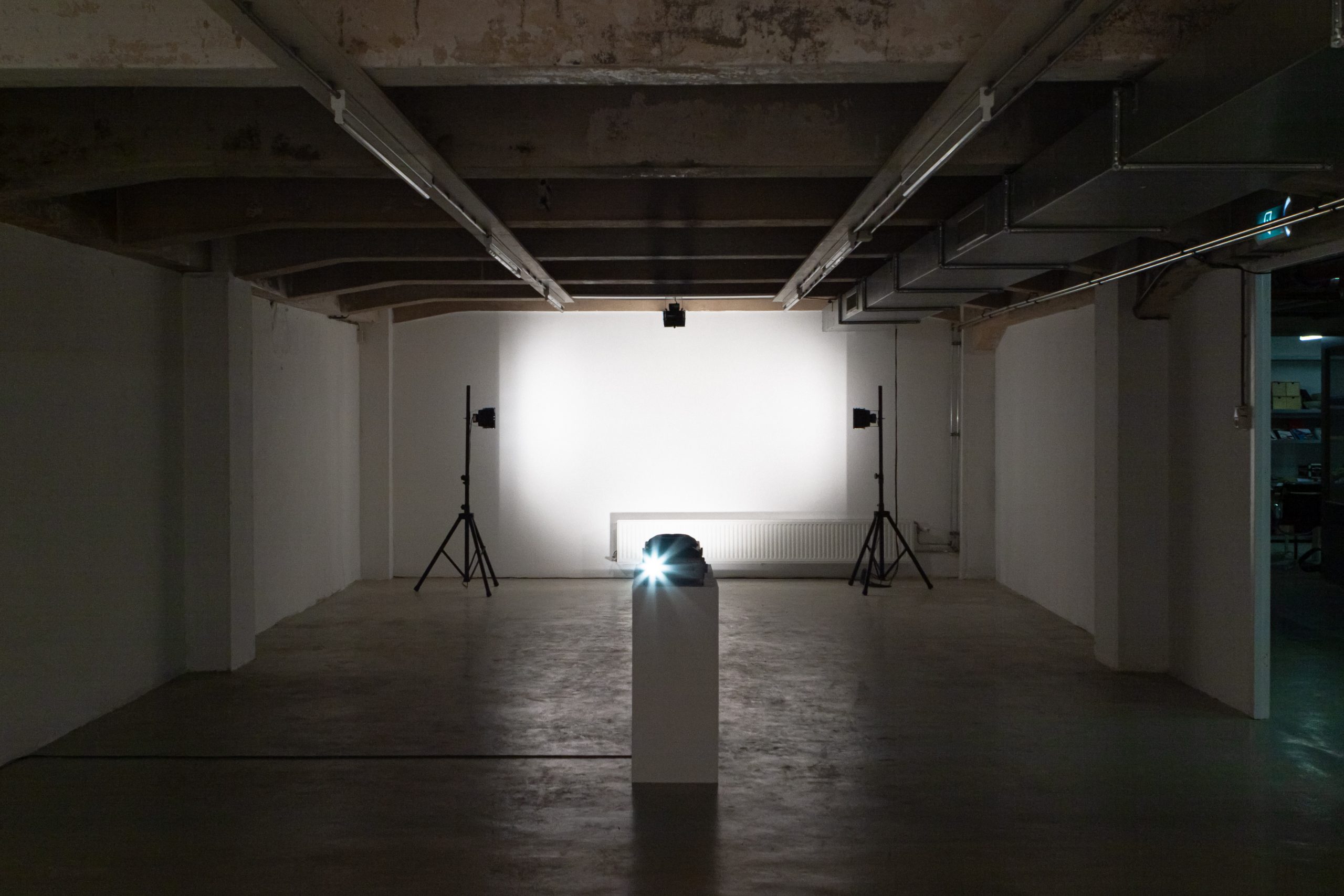 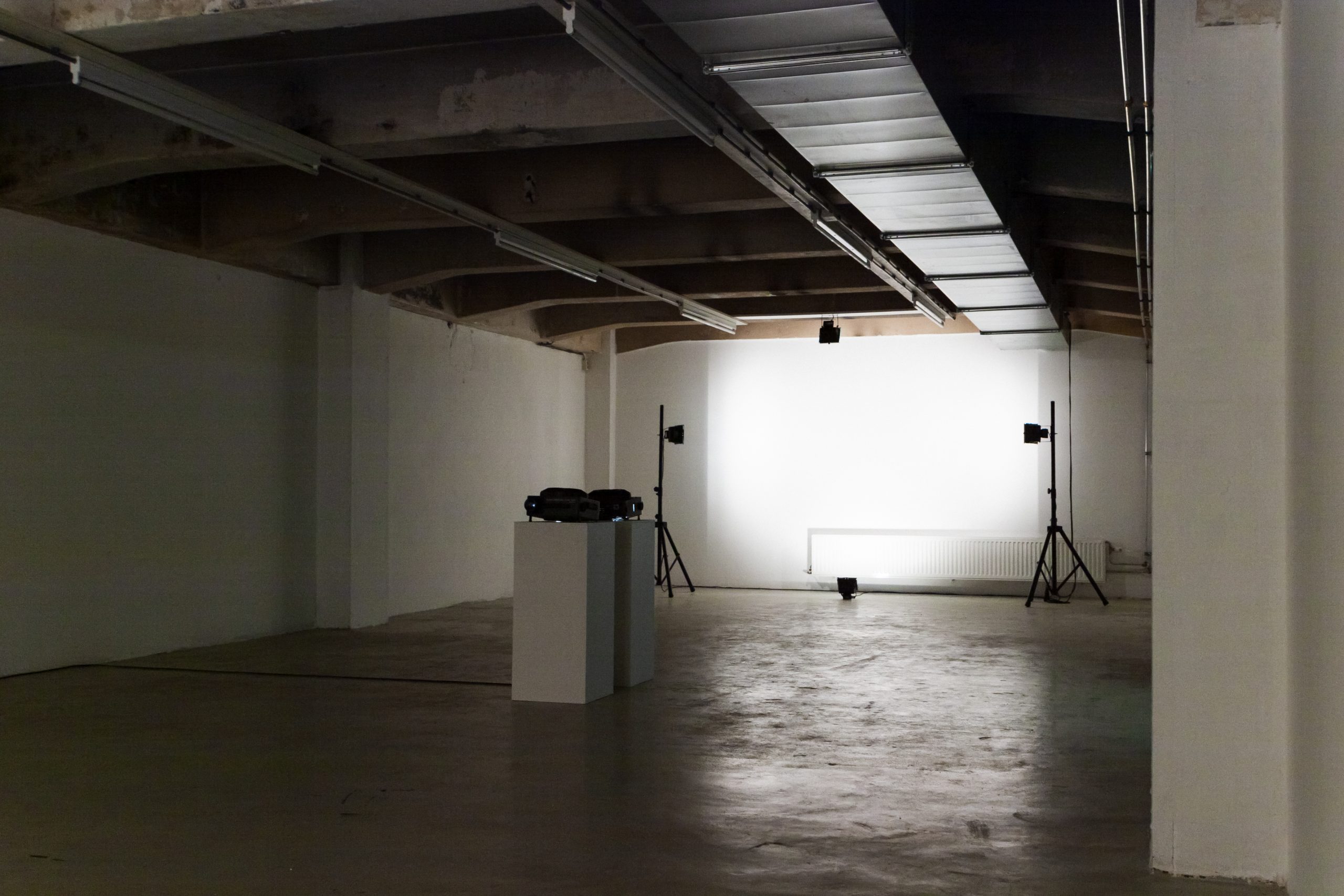 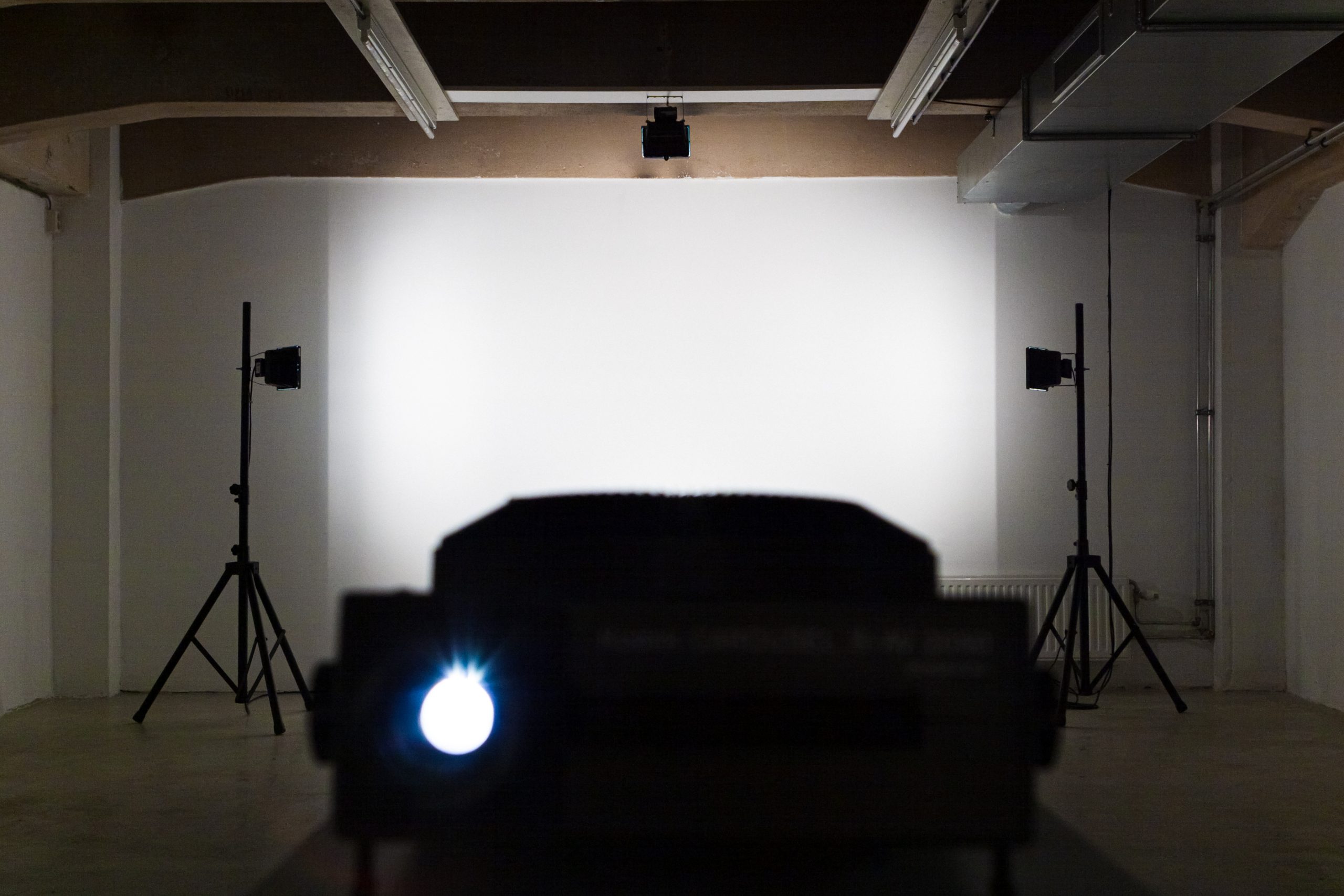 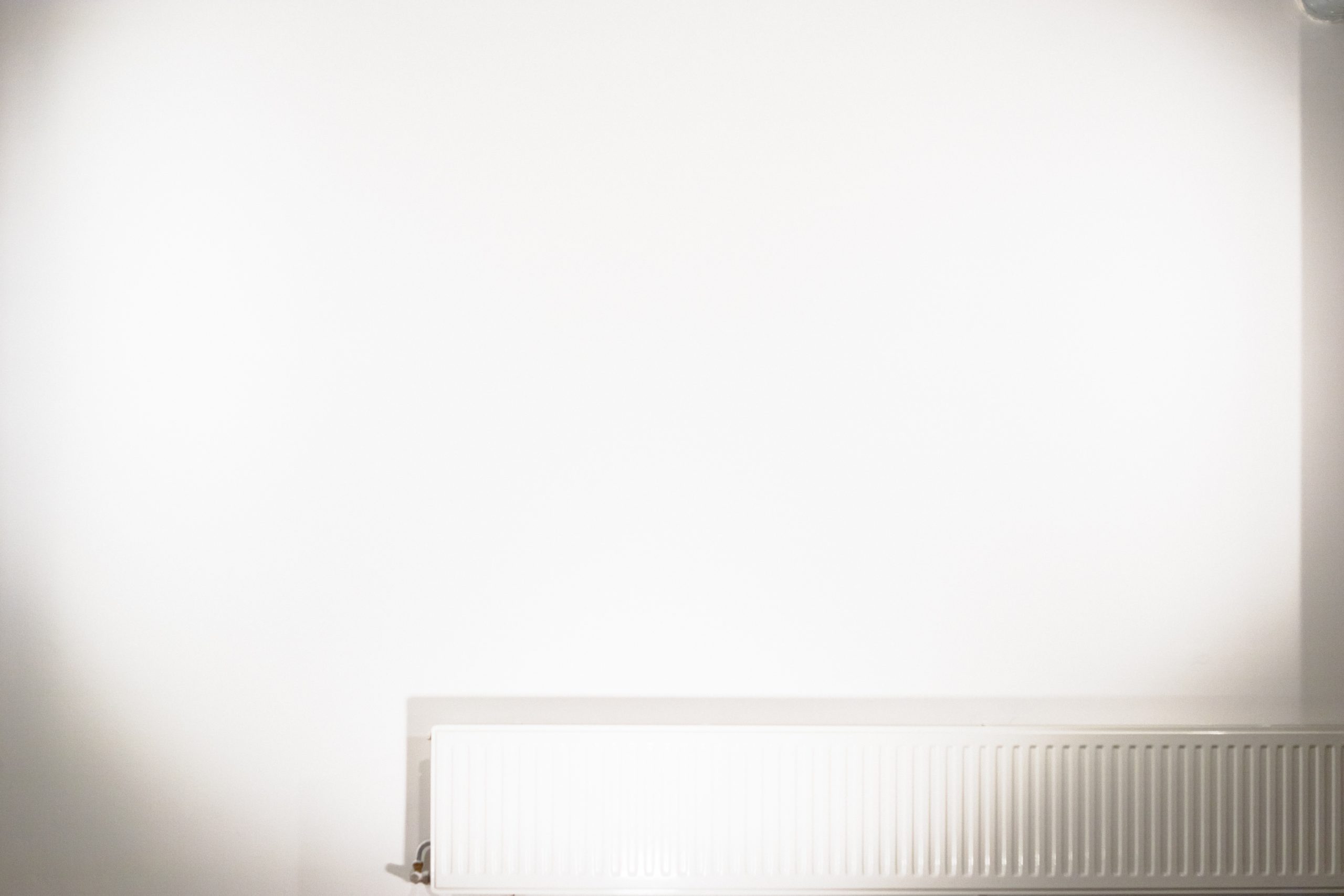 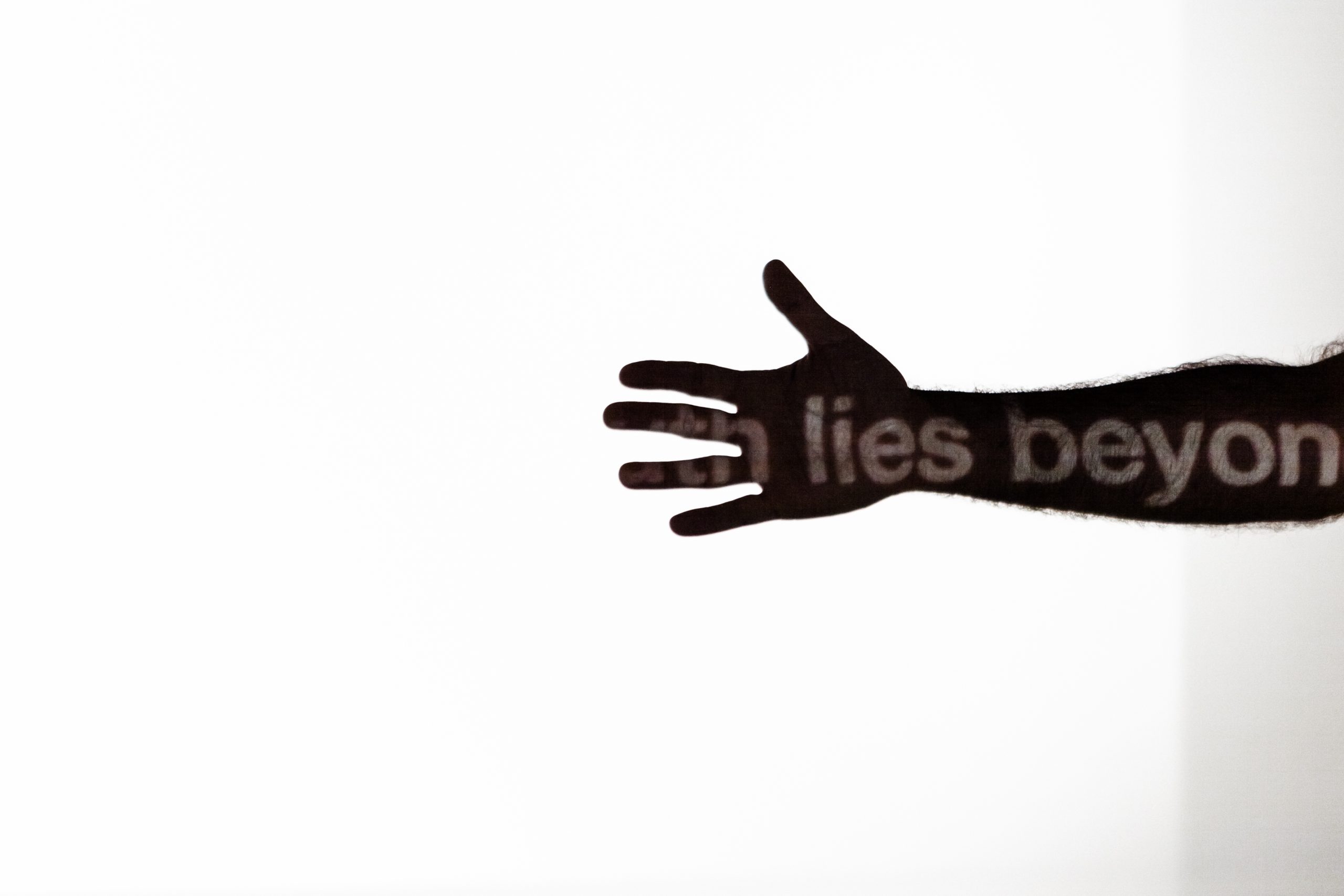 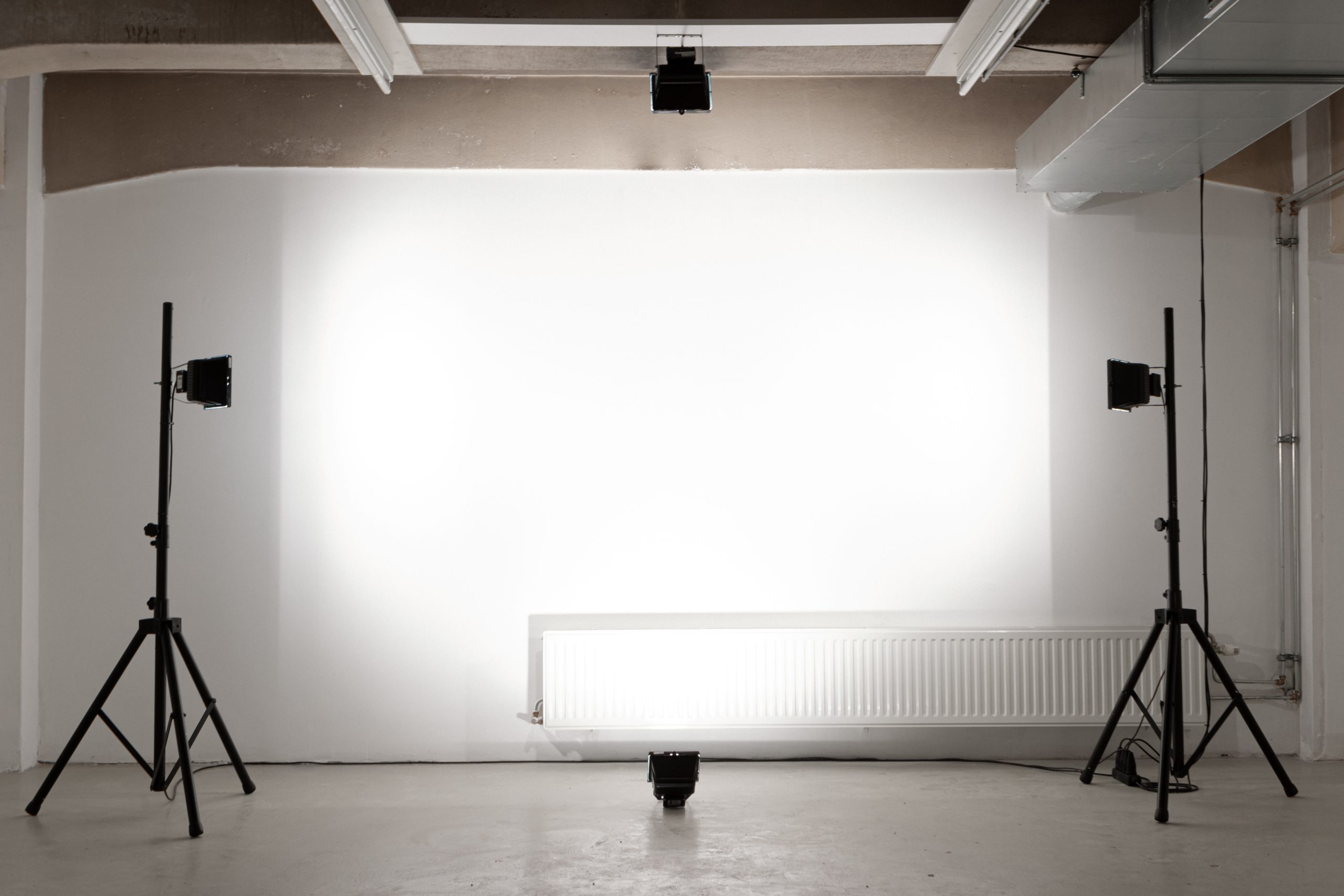 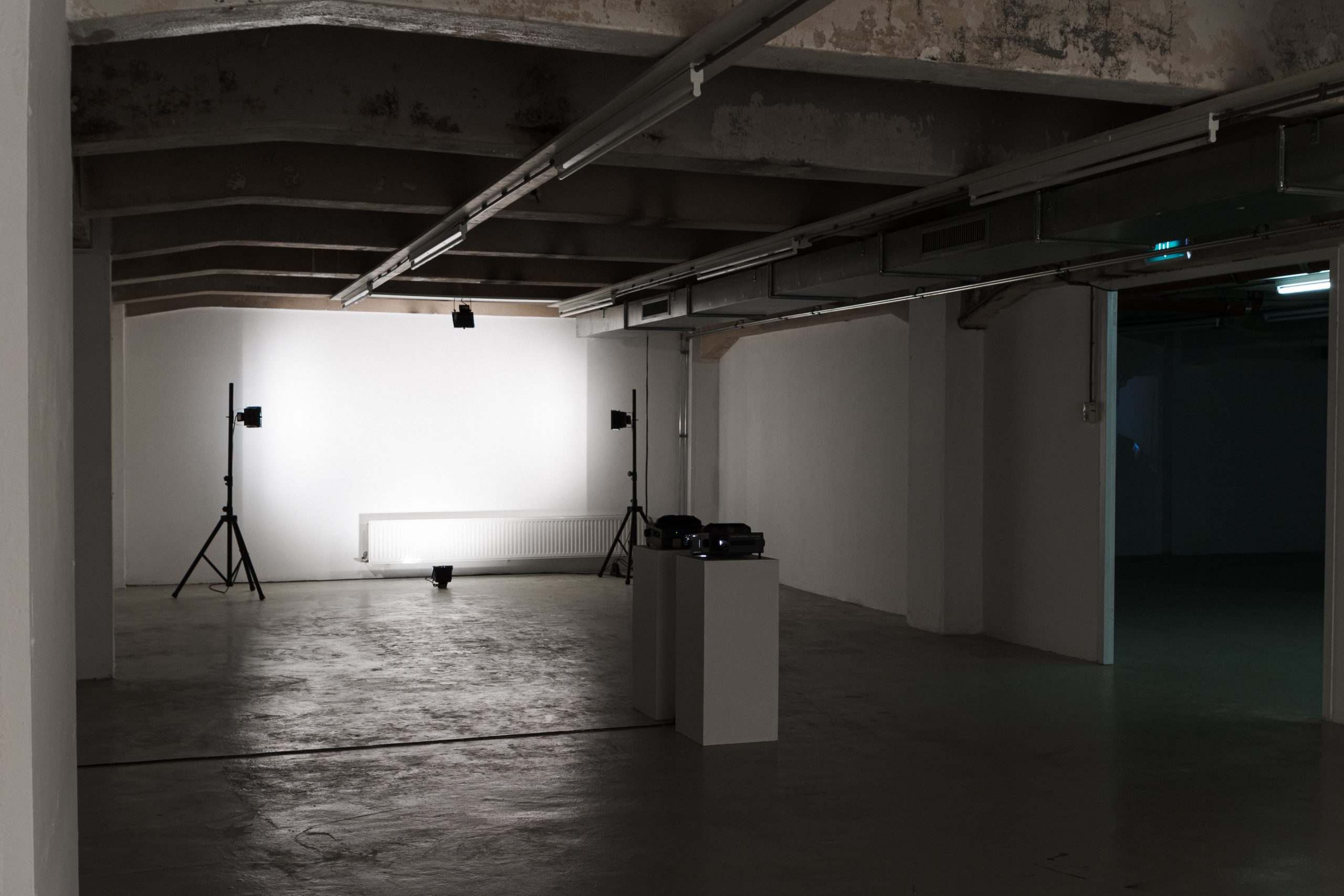 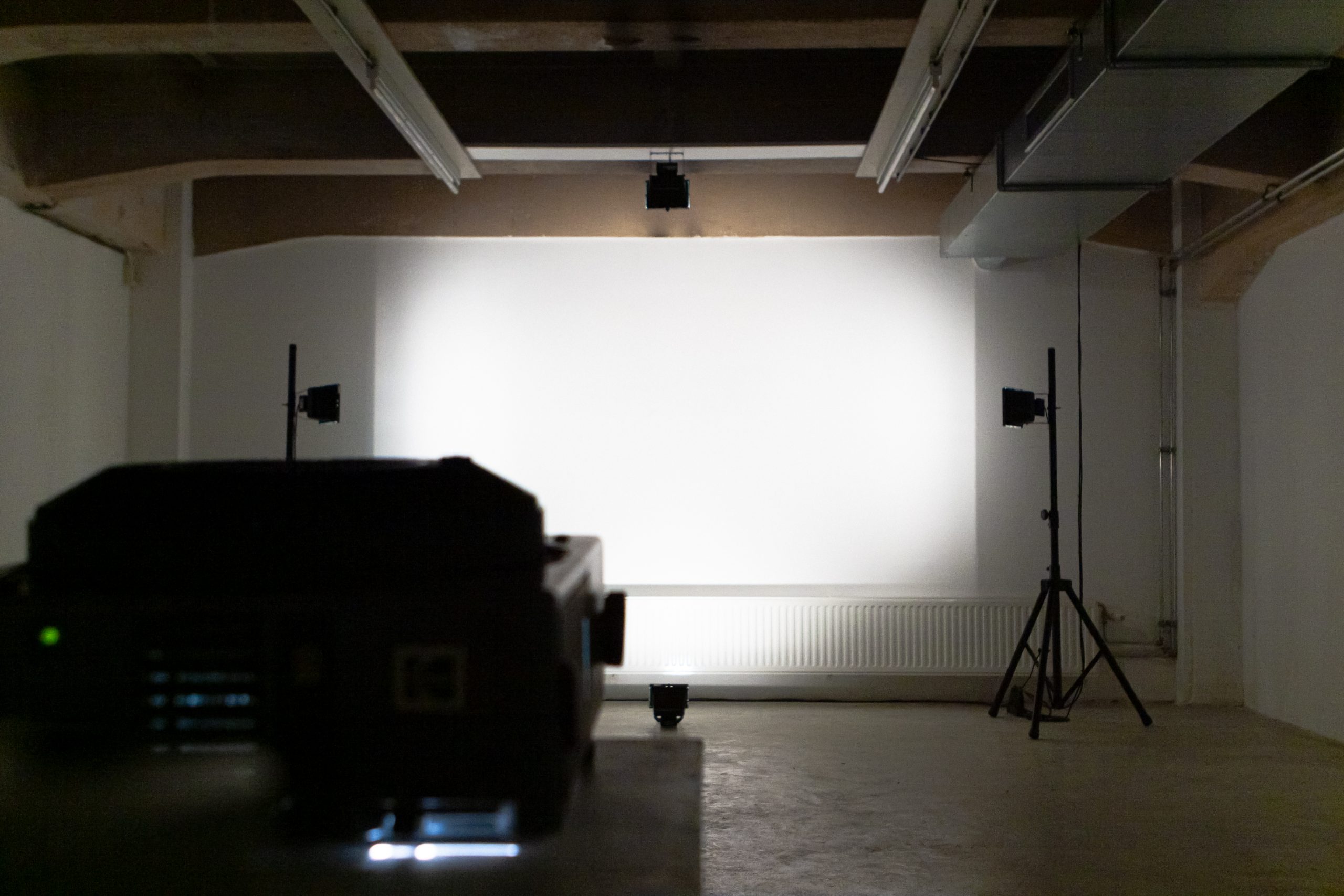 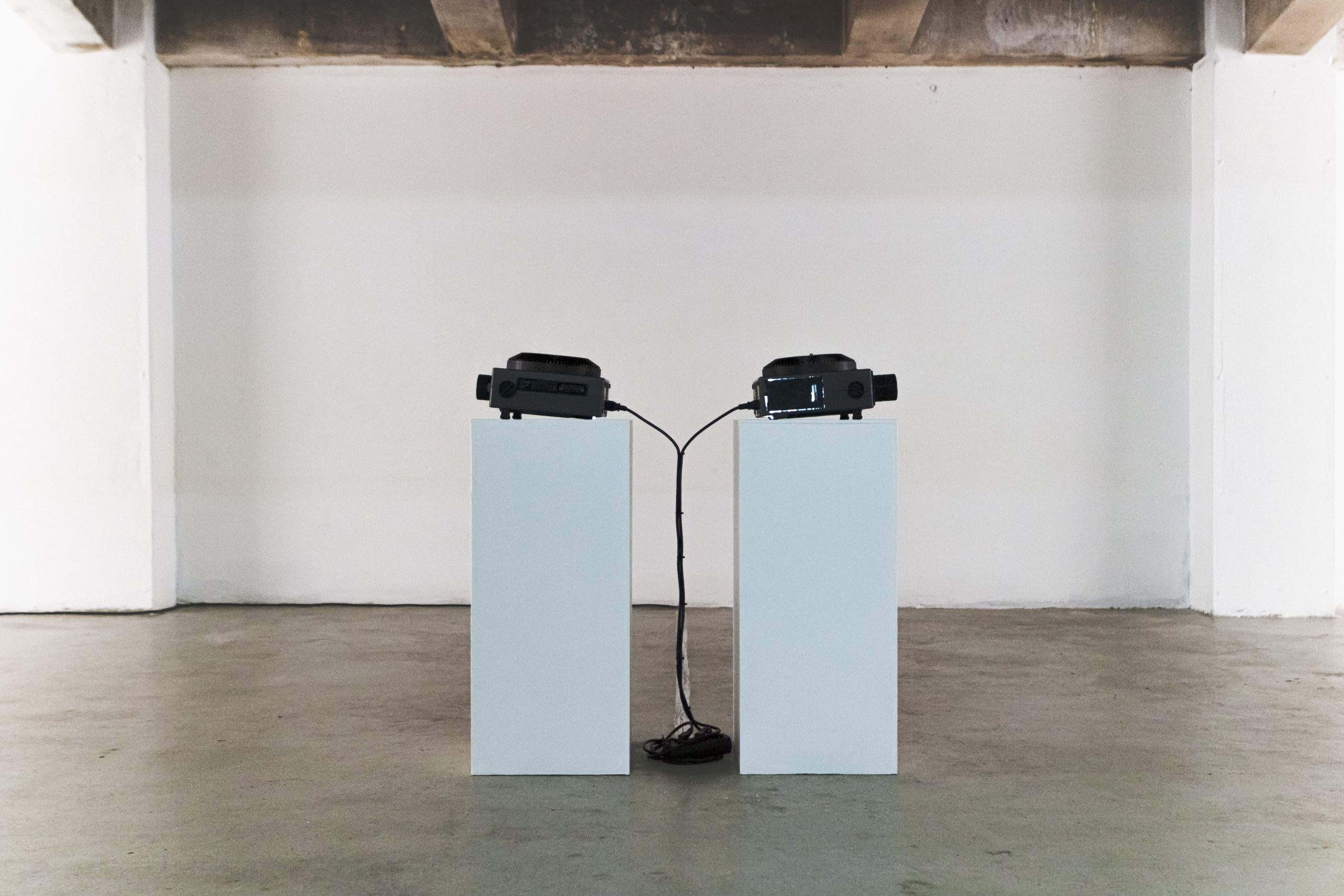 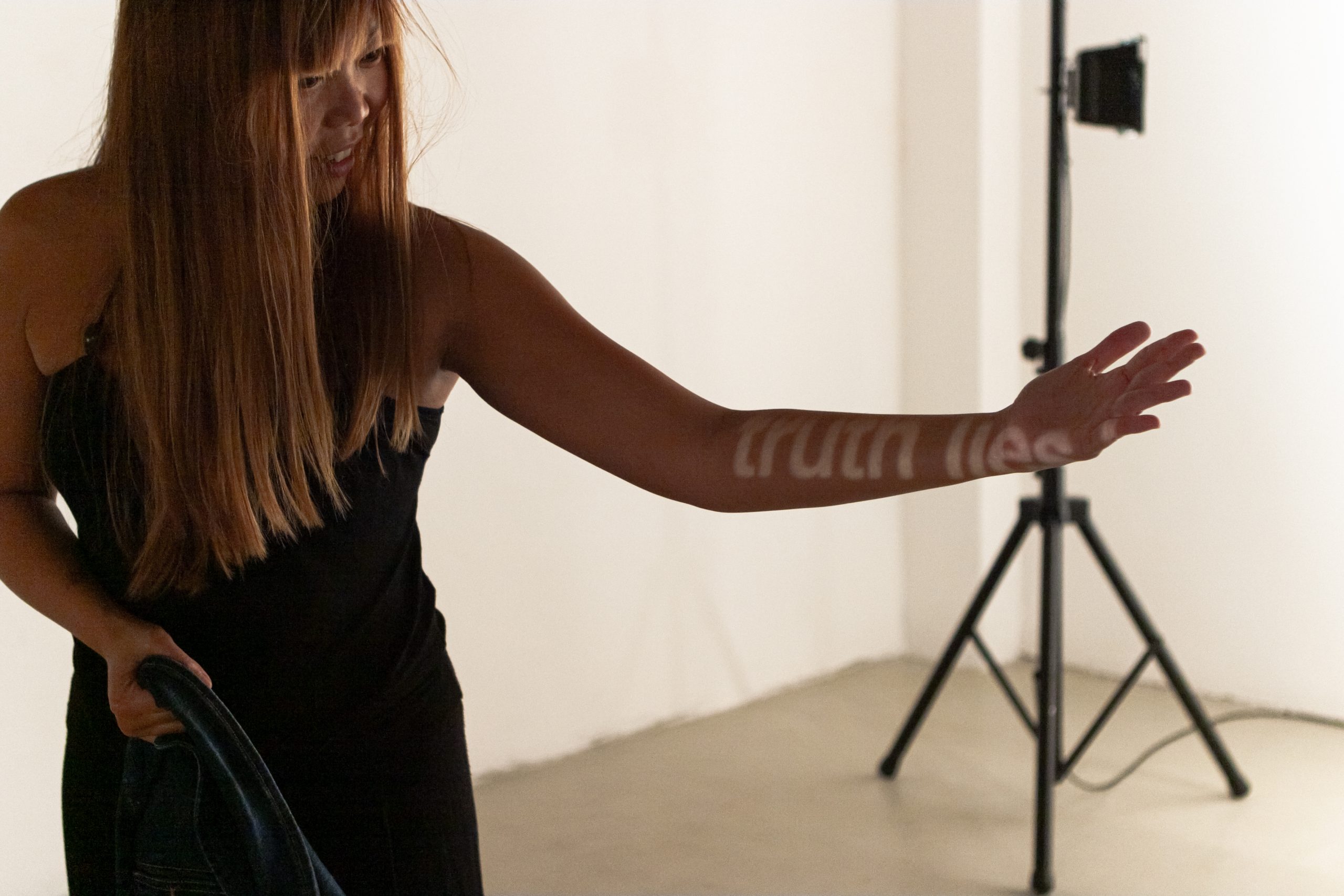 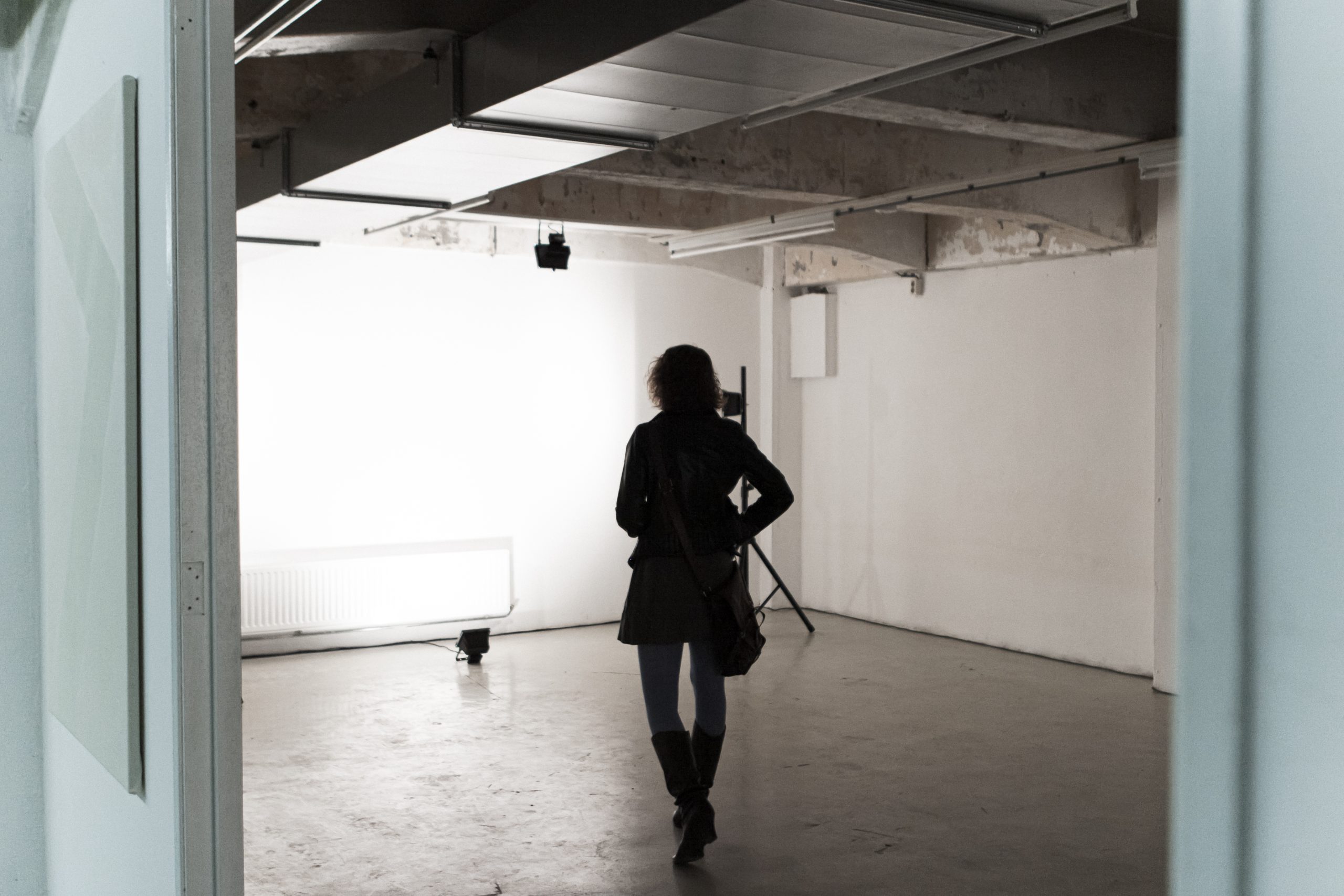 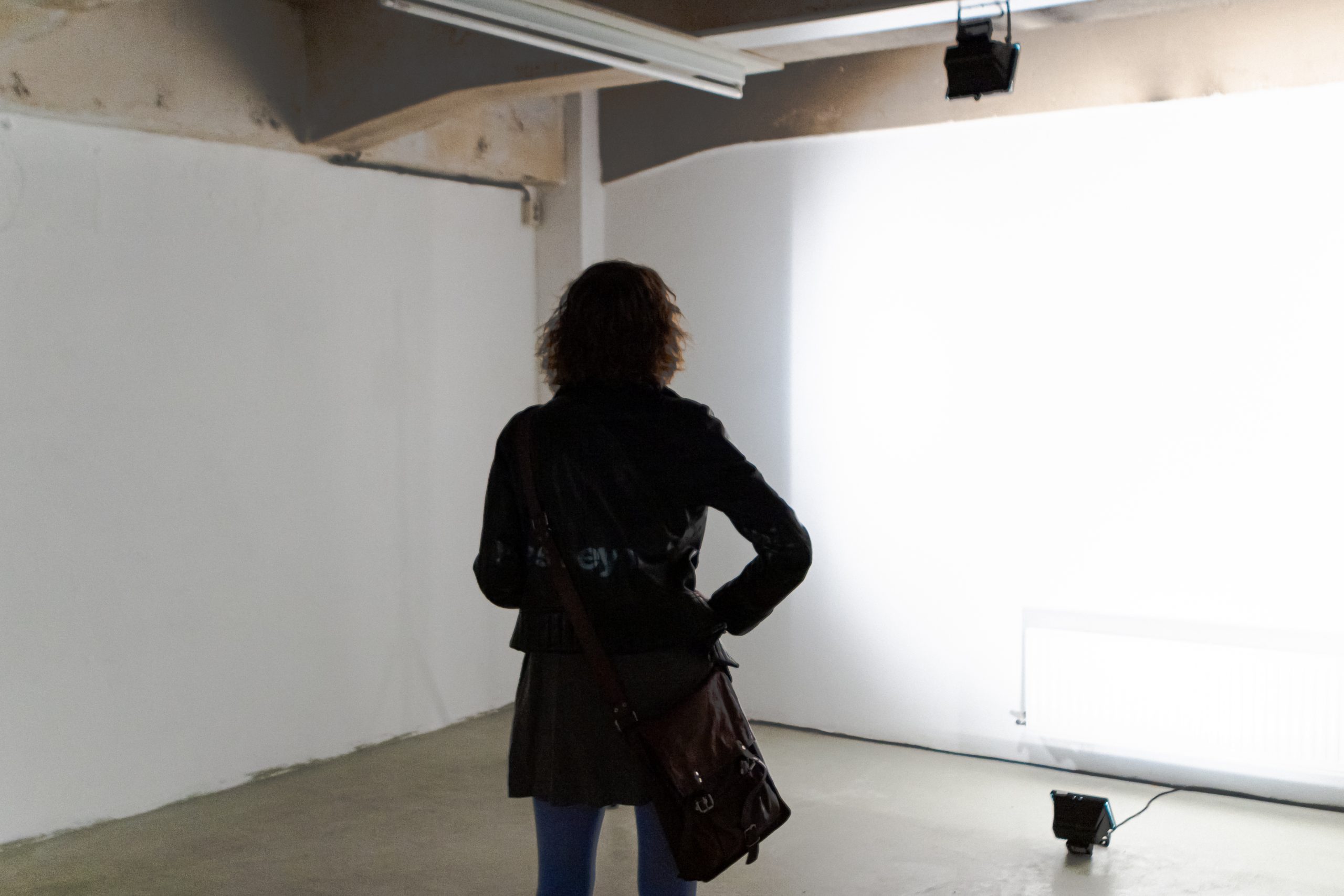 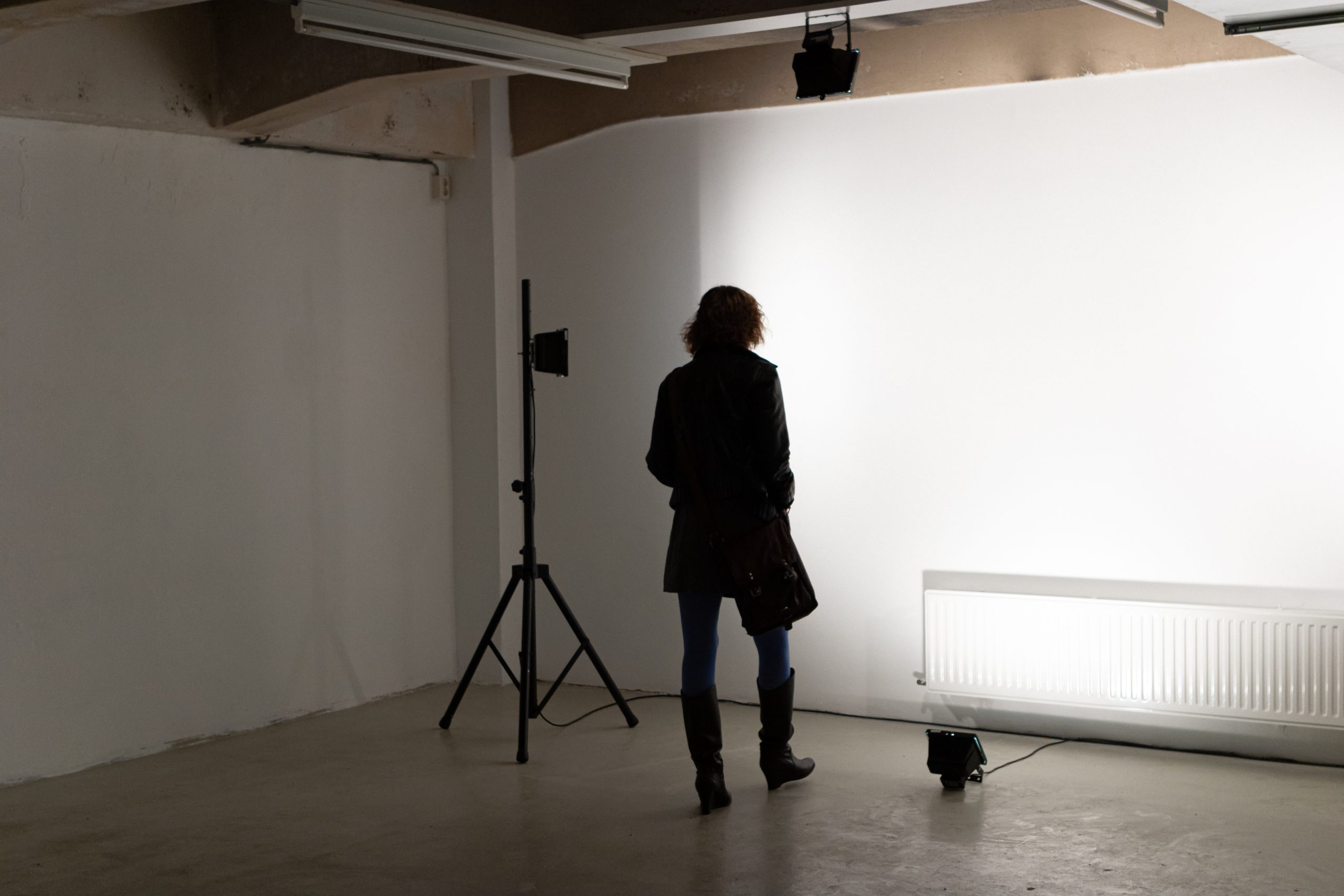 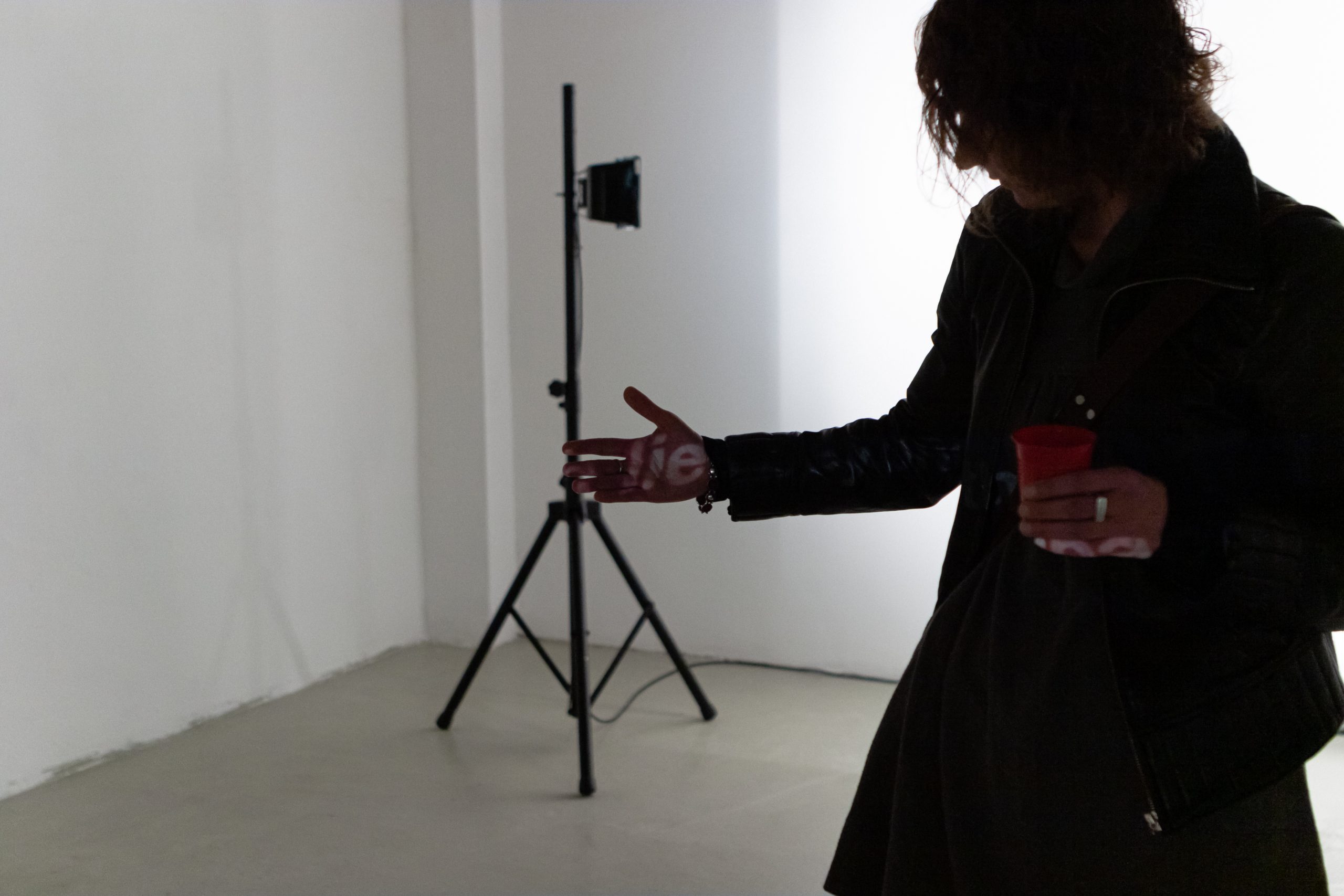 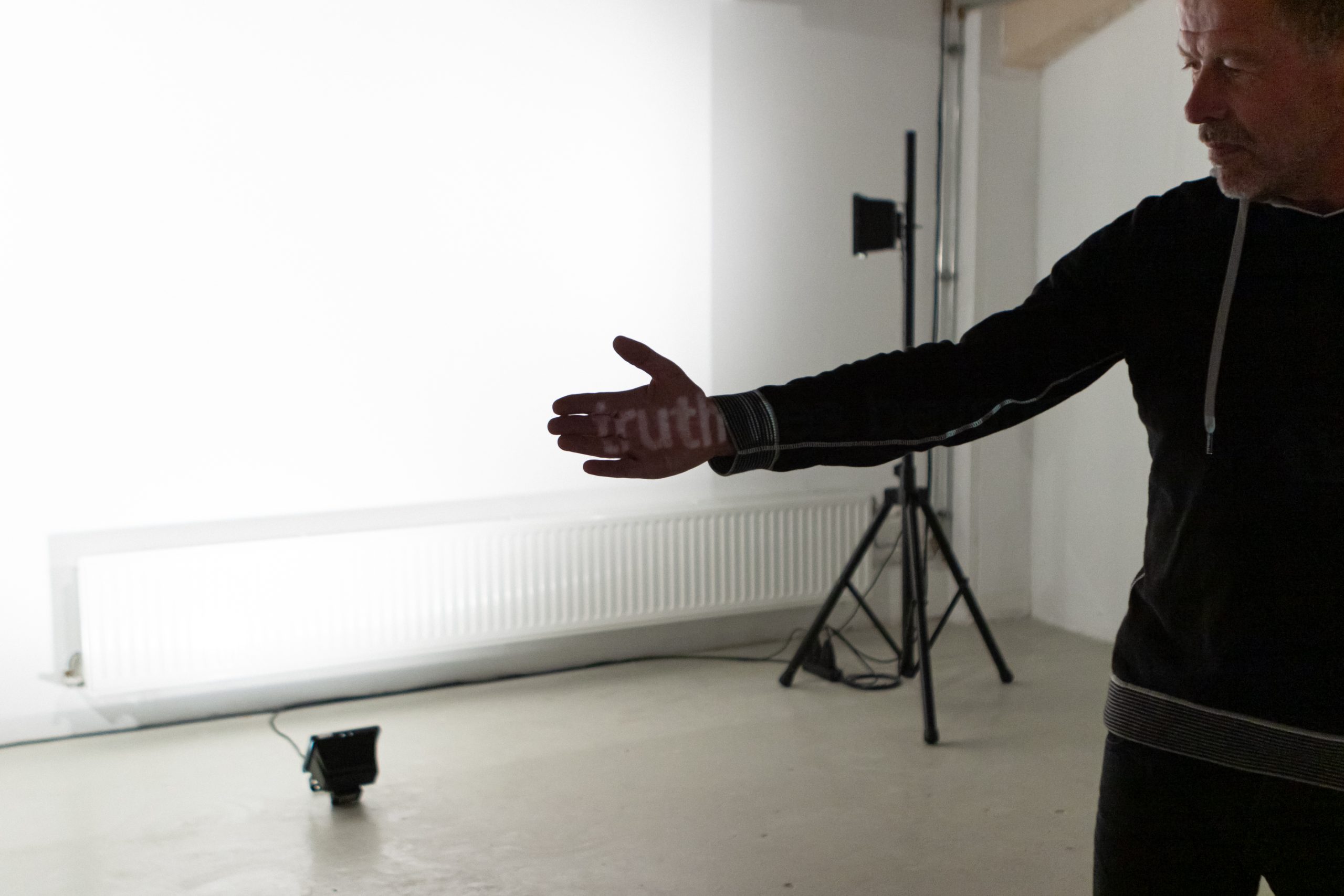 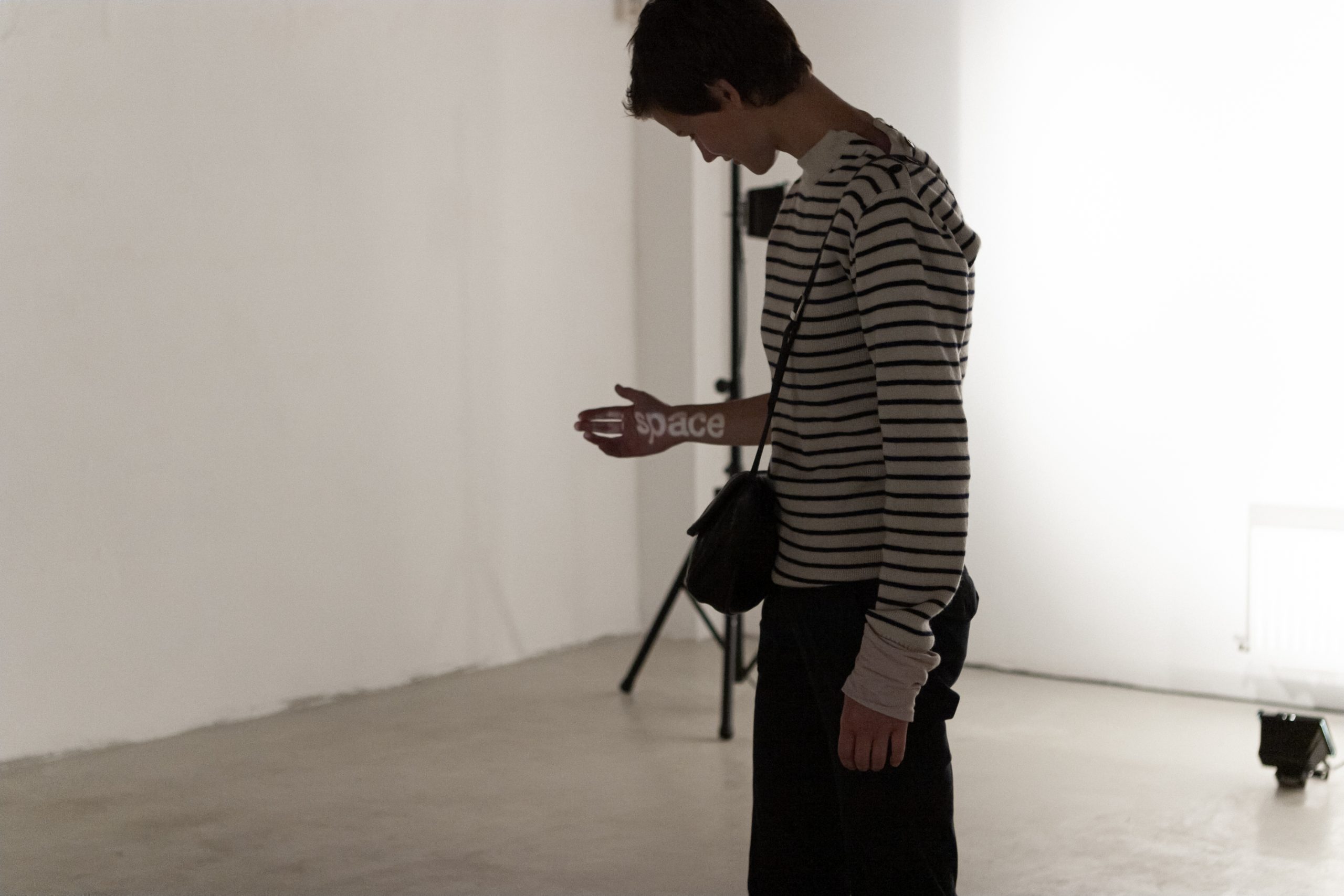 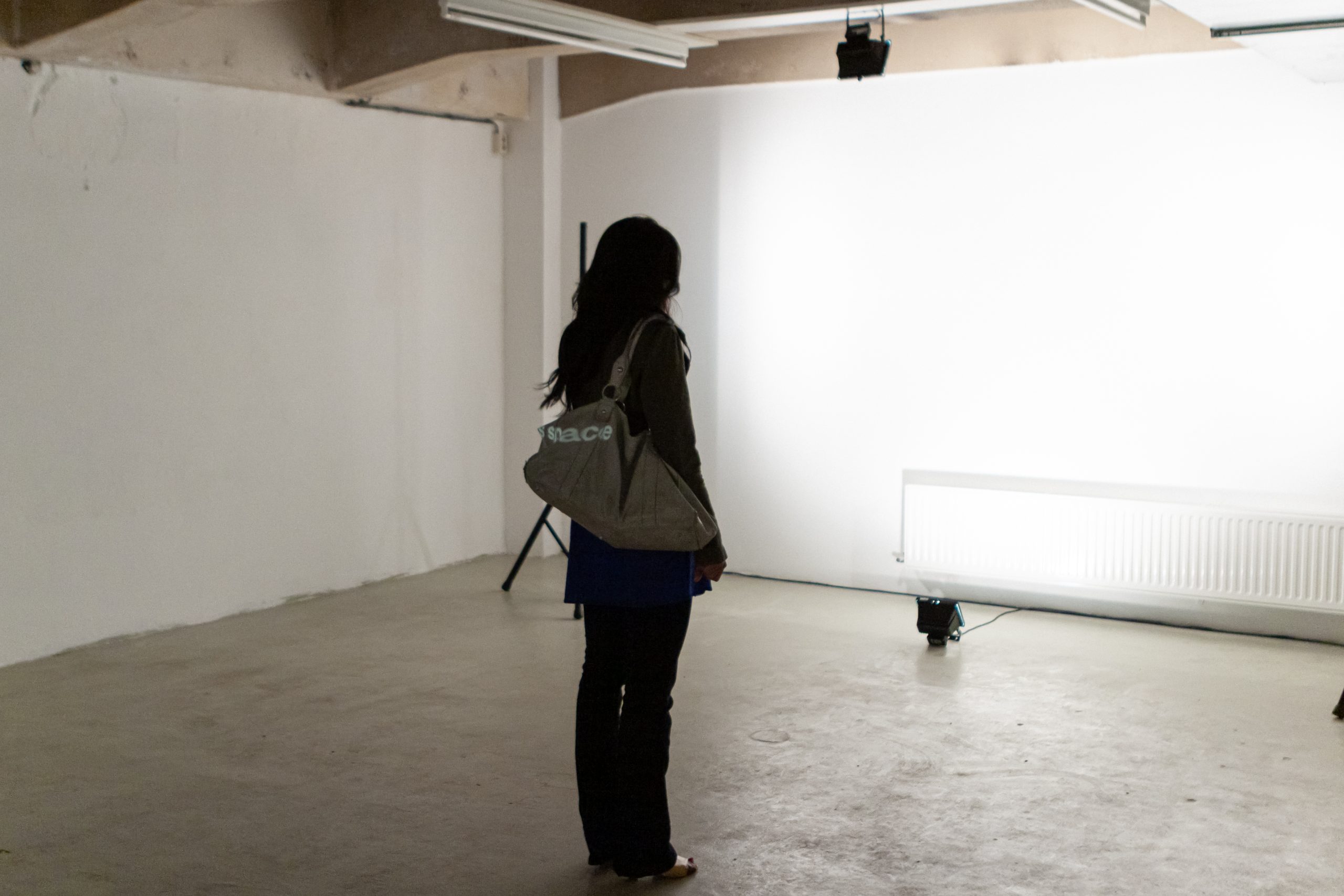 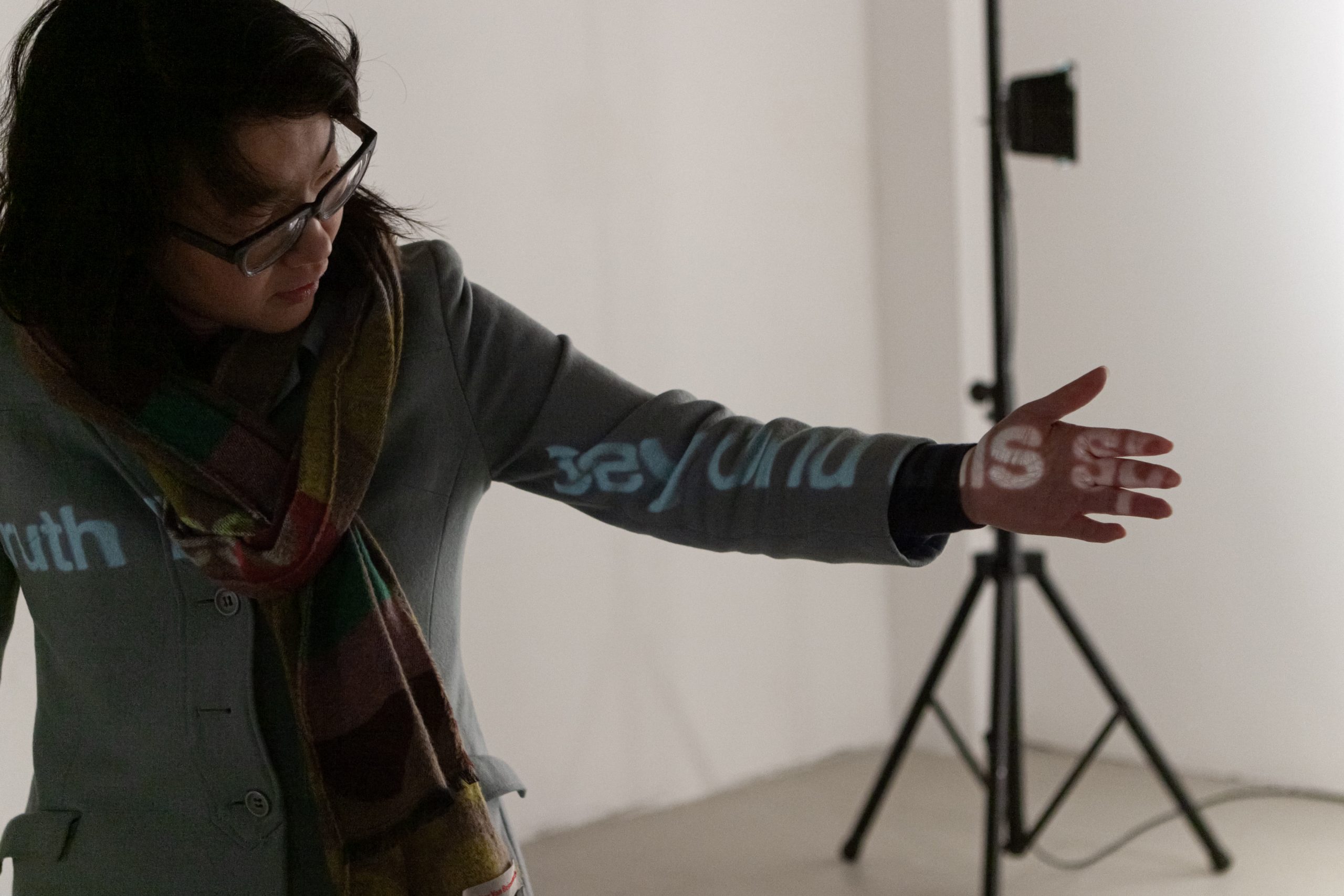 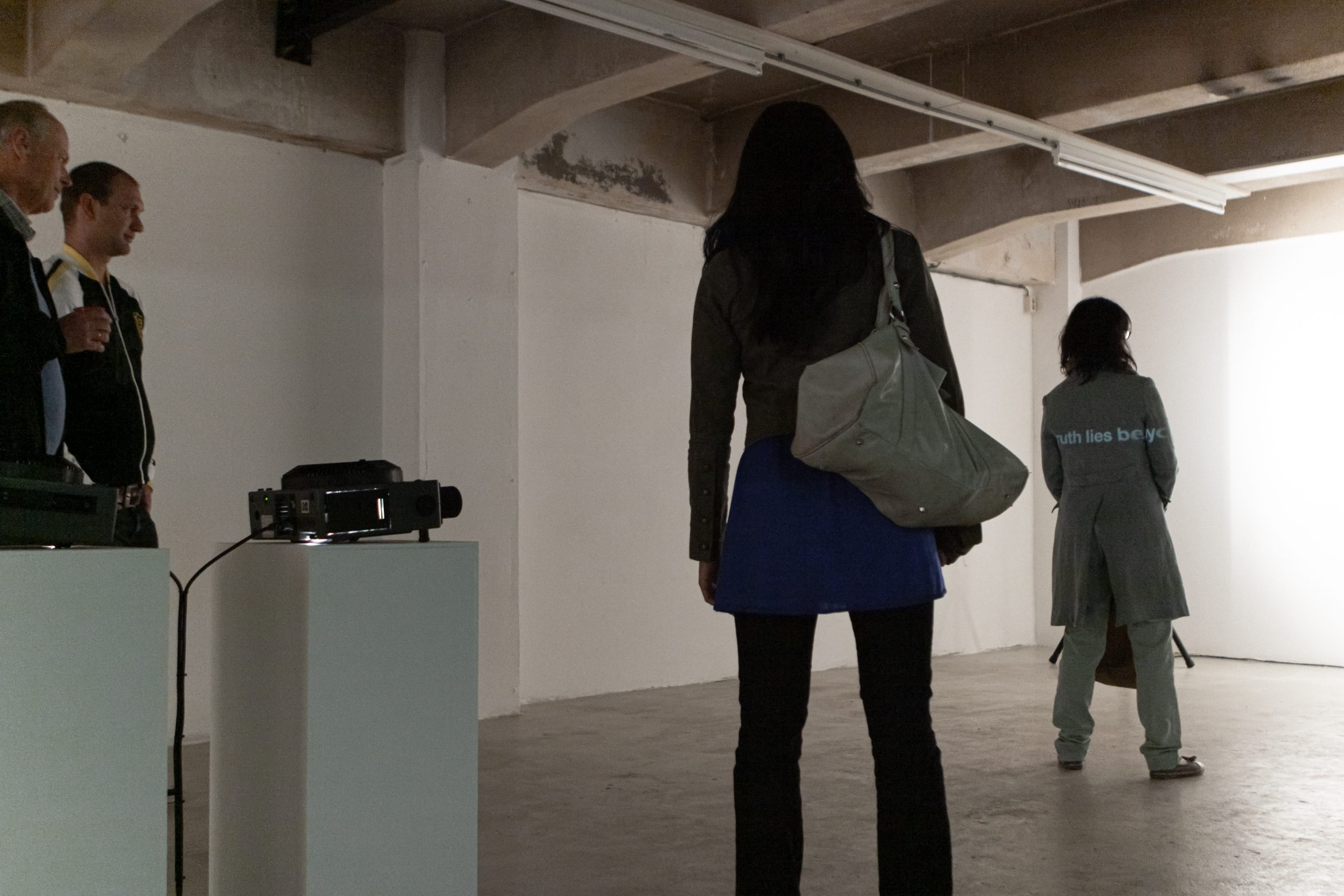 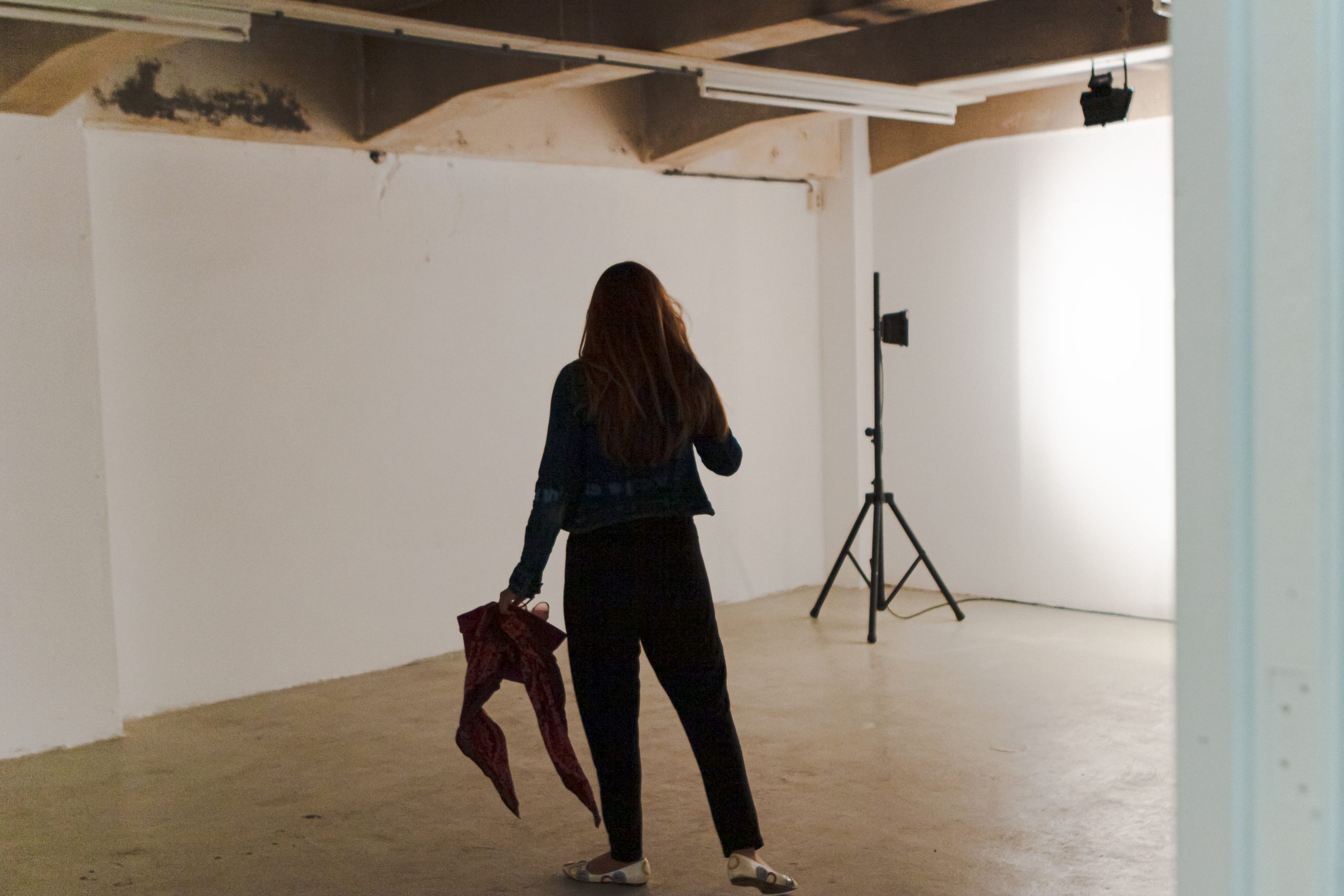 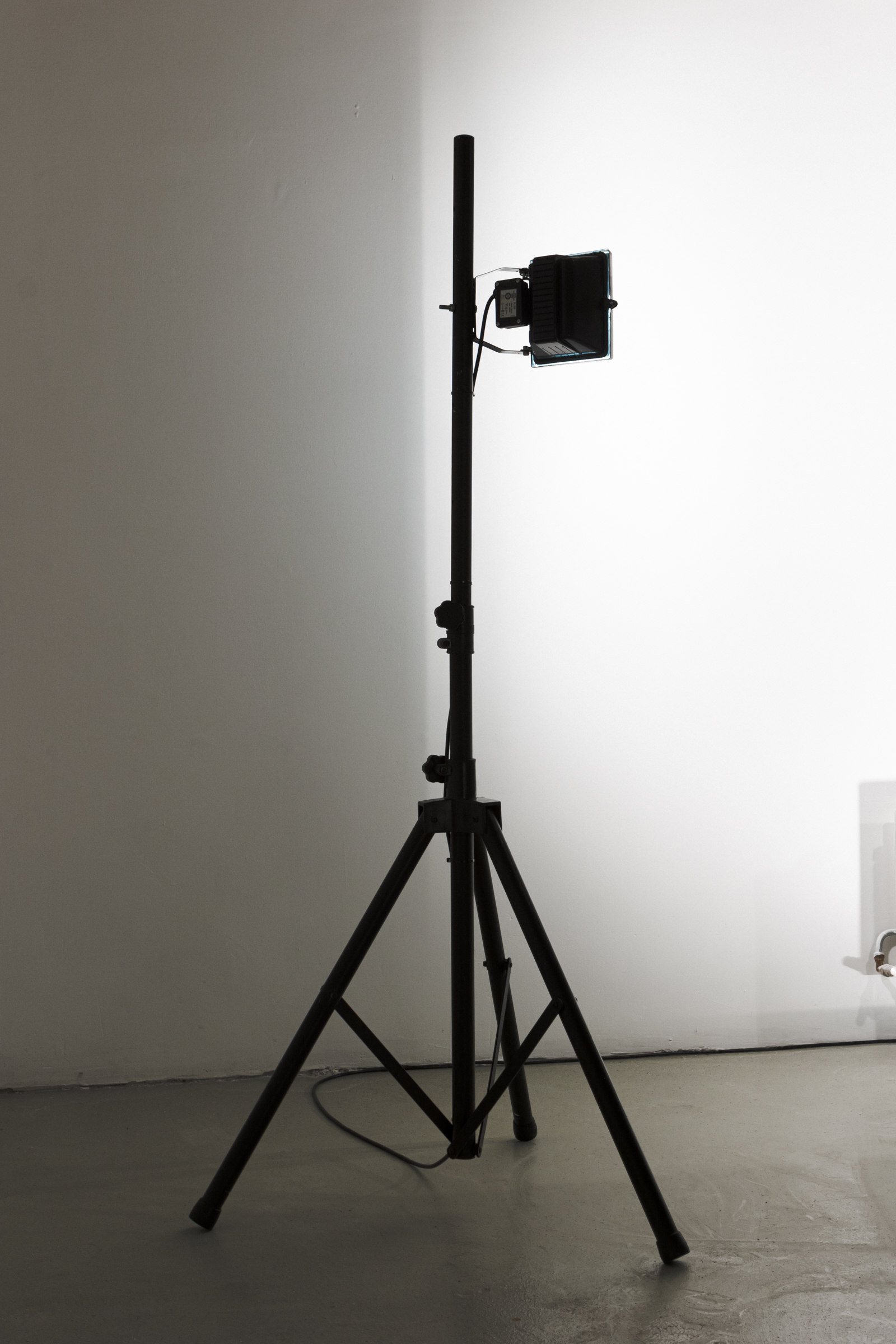 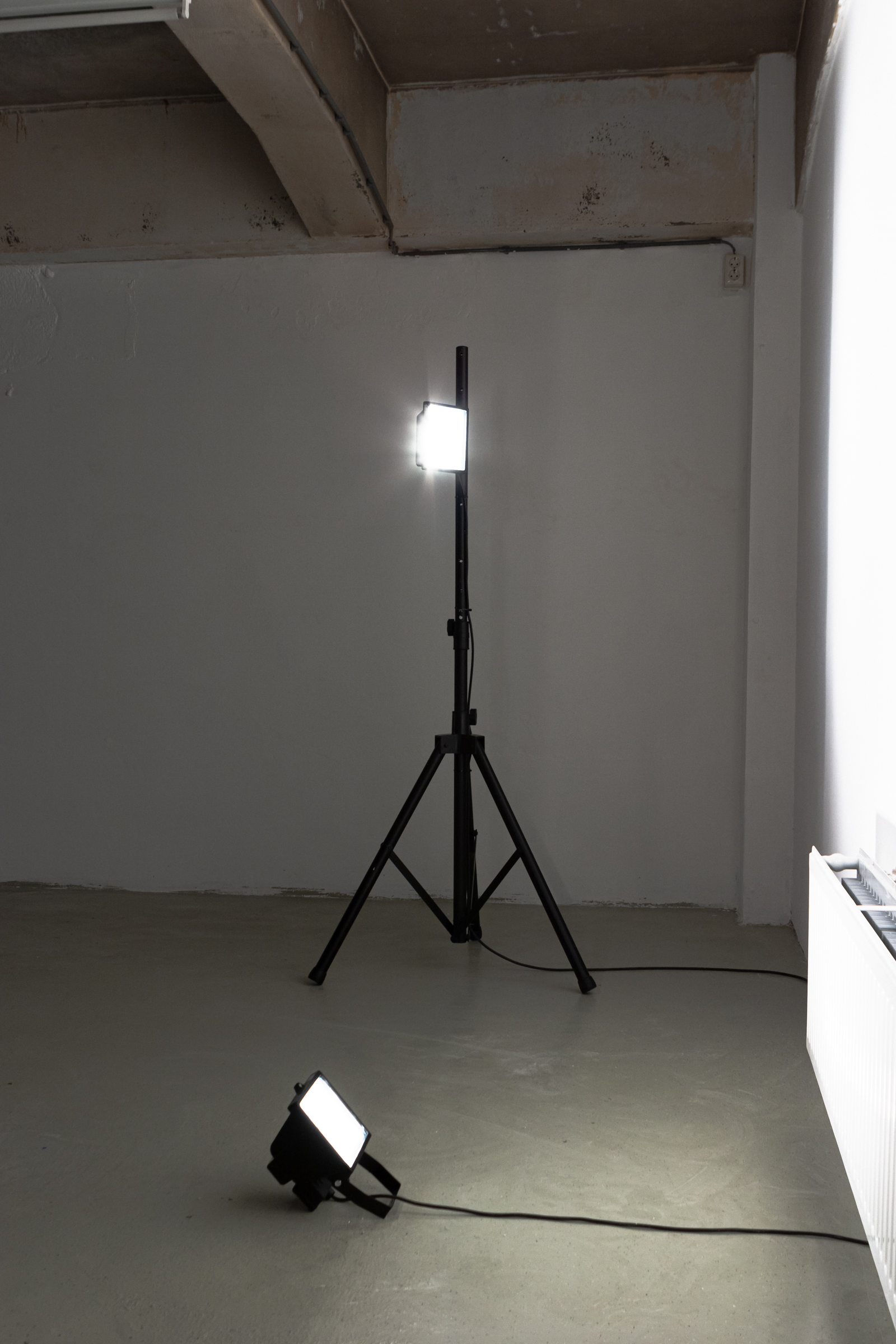 PW1: Hanging a planet on the wall