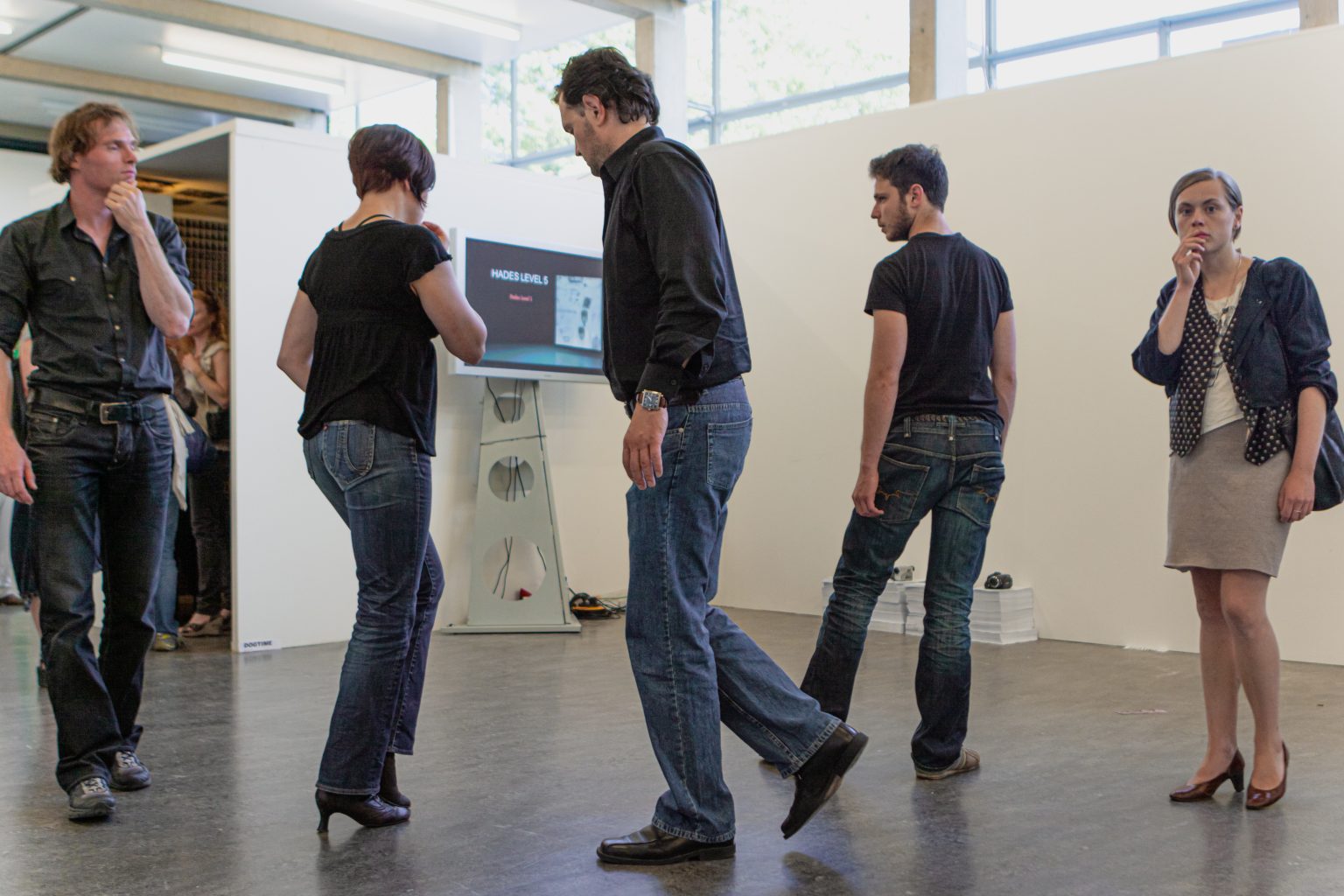 The Guarded Space project originates from a research into the rules behind a work of art. What is it that creates the experience, what is it that gives rise to its meaning, its existence, and with what consequences? Does meaning arise from subjective perception alone, fueled by the seductive surface and allusive inner form? Or is it being created out of publicly governing ‘qualia’, miraculously attached to the surface, and extending far beyond its illusionistic nature?

In Guarded Space a group of performers try to establish a virtual space within the art context of an exhibition. This space is both arbitrary and sacred, empty and loaded, transparent and forbidden. The basic principle behind the work is 4 performers defining and guarding a rectangular surface of about 4 x 4 meters out of the 4 corners of that space. In first instance the actual definition of the space is transparent to a visitor, e.g. it is unclear if the performers are creating a work of art, are fellow artists or ‘just’ visitors. The ‘guarding’ of the space is done through 6 basic scenarios in which the actual implementation of it borders between actions in reality and improvisational theater. The focus lies more on a mental play than on actual physical guarding.

» Who’s afraid of Guarded Space [4p, ws]: 4 performers, each equipped with a digital video camera, film the ‘through filming created space’. The registration is sometimes transparent, ‘in reality’, and sometimes clearly theatrical, confronting. Among other things that are focused upon are: the virtual line going from the camera man to a fellow performer or passer-by, the space, the passers-by and themselves. When a passer-by approaches the forbidden zone, the performers try to get him ‘out the picture’ by means of framing him with the camera.
» Comfort zone [6p,t]: 4 performers are waiting freely at the corner points of the constructed space when from its surroundings a fifth (and later sixth) performer in the role of artist whose work is misunderstood, seeks comfort on one of the corners points. The actual meaning of the consolation is defined by the performers, for instance a slow hug or just leaning against each other. After a consolation action one of the ‘consolators’ disappears again in the surroundings, until he also steps in the role of an artist who seeks consolation on a different corner point.
» Dubious space [4p,t]: 4 performers in the role of salesmen wait impatiently for potential buyers. Each one is holding an empty A4 sheet of paper. At a suitable moment one of them approaches a passer-by whereupon a partly improvised dialogue emerges based on a particular opening sentence. The other 3 performers are free to join in the conversation. What happens to the empty sheet of paper is decided there and then. It can be handed over as a gift, shown an example object, or torn into pieces.

Are you familiar with the artist Luciano Pinna? I am his artwork called Guarded Space. You are now part of the artwork. How does that make you feel? I am in doubt about myself, but I am pleased that you are watching me. I am guarding the space, what are you doing? Can I ask you how many A4s constitute to a work of art? I don’t know, my answers are limited by my creator.

» Reflections on anxiety [4p, ws]: 4 performers are faced inwards with each of them holding a small mirror. By means of the mirror they scan the space behind themselves, where their point of focus nervously changes between themselves and that space. The performers try to track a passers-by moving outside of the forbidden zone and keep them away from it by means of staring at them through the mirror.
» Frozen moves [4p, ws]: out of the surrounding space performers walk, run, jump or dance into the virtual zone. As soon as they are within the space their movements continue, only now in slow-motion, until they have left that space again. This is repeated indefinitely in which also passers-by are allowed to enter the zone, as long as they submit themselves to the same sensation of time as the performers.
» Bored on a4 [4p, ws]: 4 performers, each one being seated on a stack of empty sheets of A4 paper, are wearily waiting for contact. As the contactless waiting continues, so does their degree of boredom. At contact, e.g. a passer-by looks directly at one of the performers, that particular performer leaps up energetic and stares back at the passer-by. He is happy, pleasantly surprised, as if he is seeing an old lover again, and waits anxiously for things to occur. As soon as the passer-by looks away, that particular performer feels sad again and sits down. During execution of this scenario a spontaneous participation of a group of children occurred.

The performances were filmed by Annemieke van Twuijver and Sander Veenhof, and by the performers themselves in case of the Who’s afraid of Guarded Space scenario. 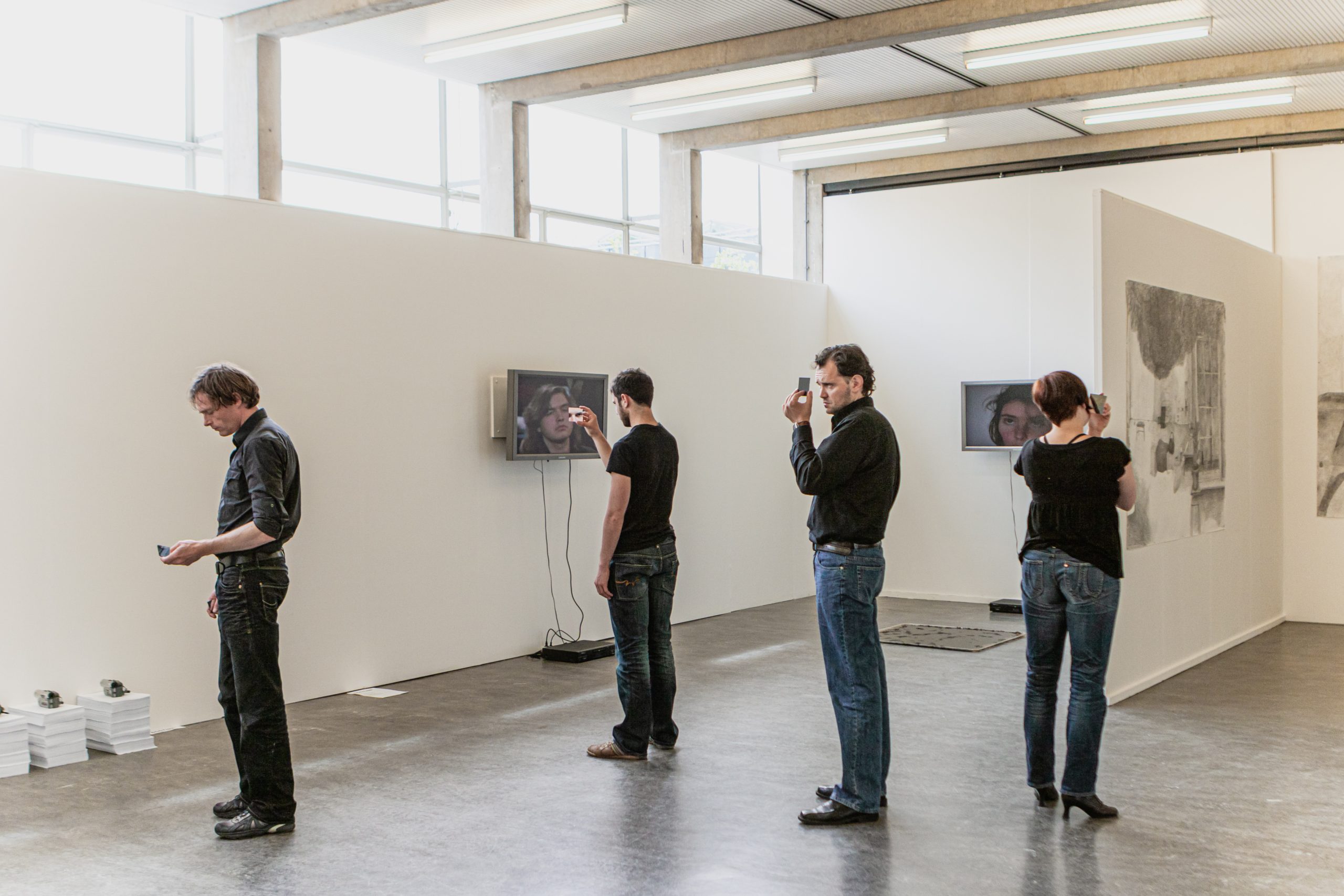 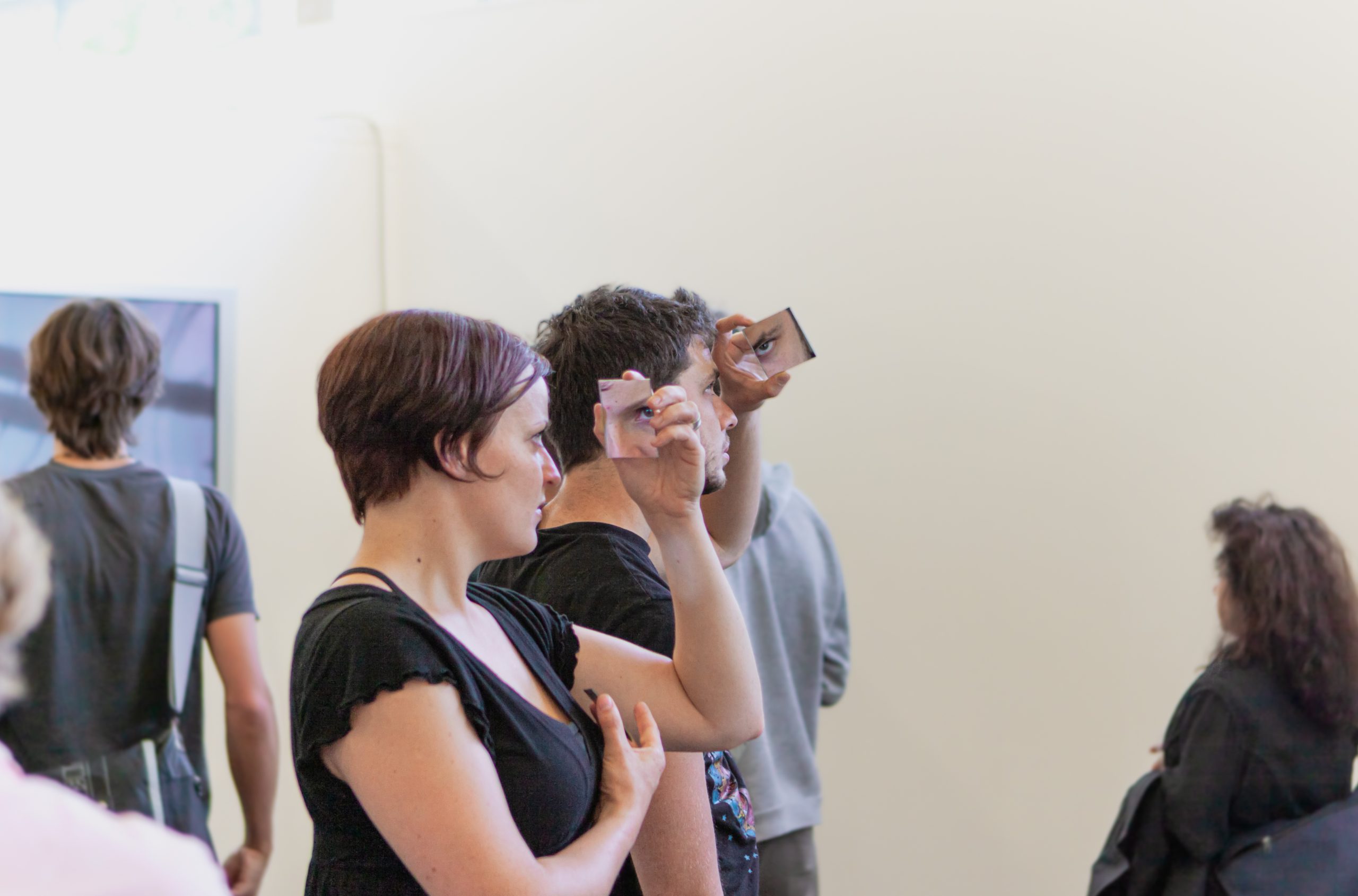 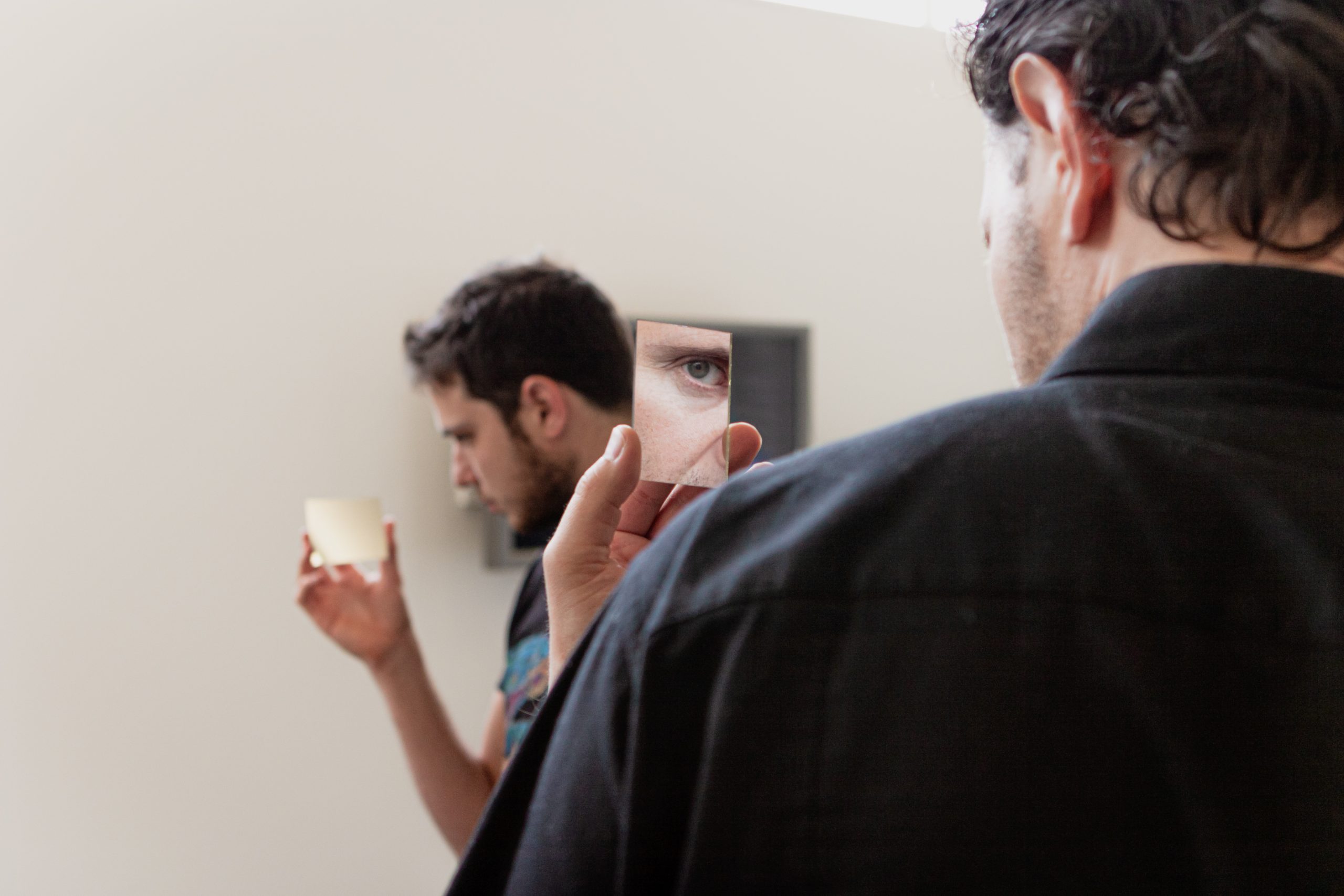 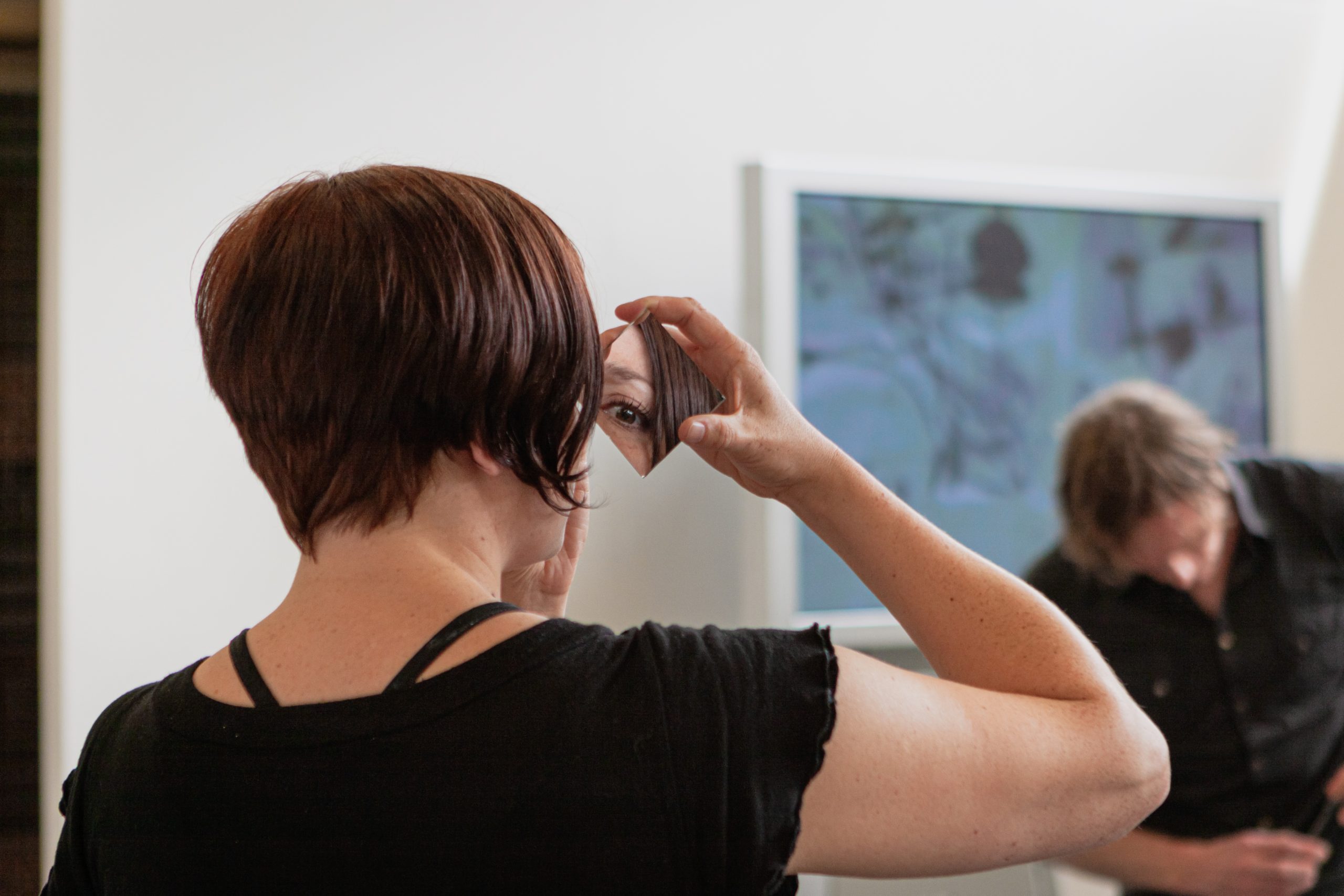 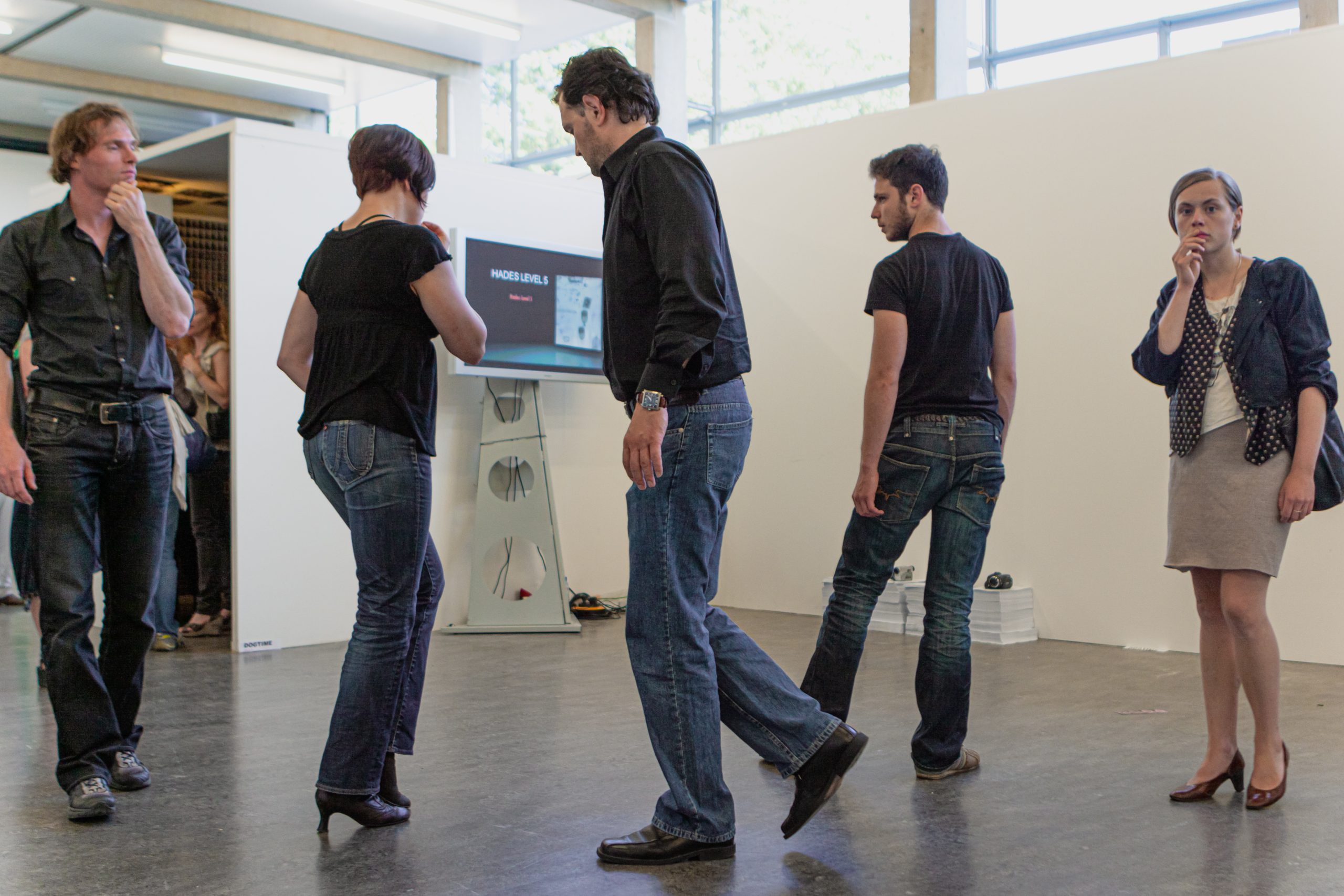 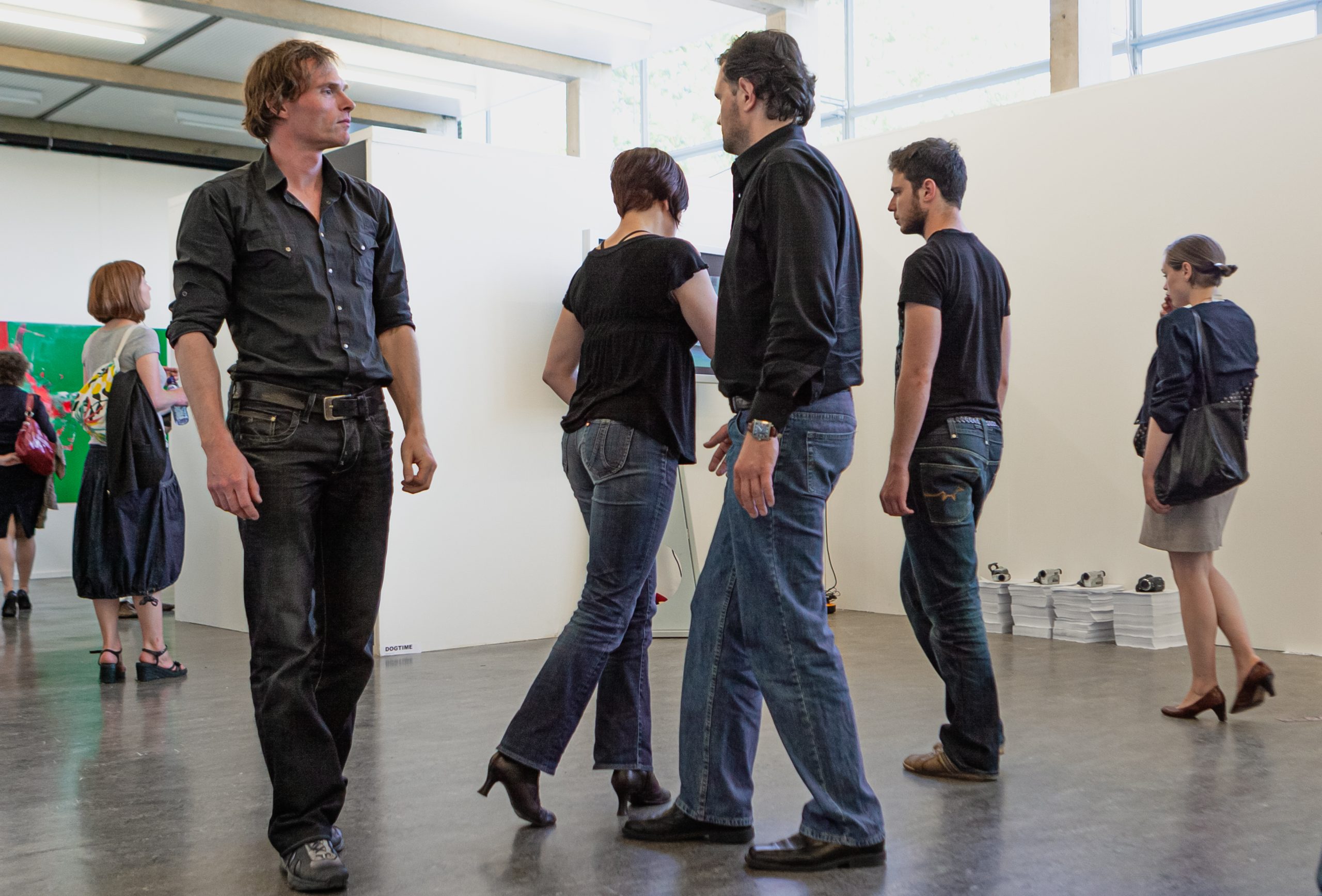 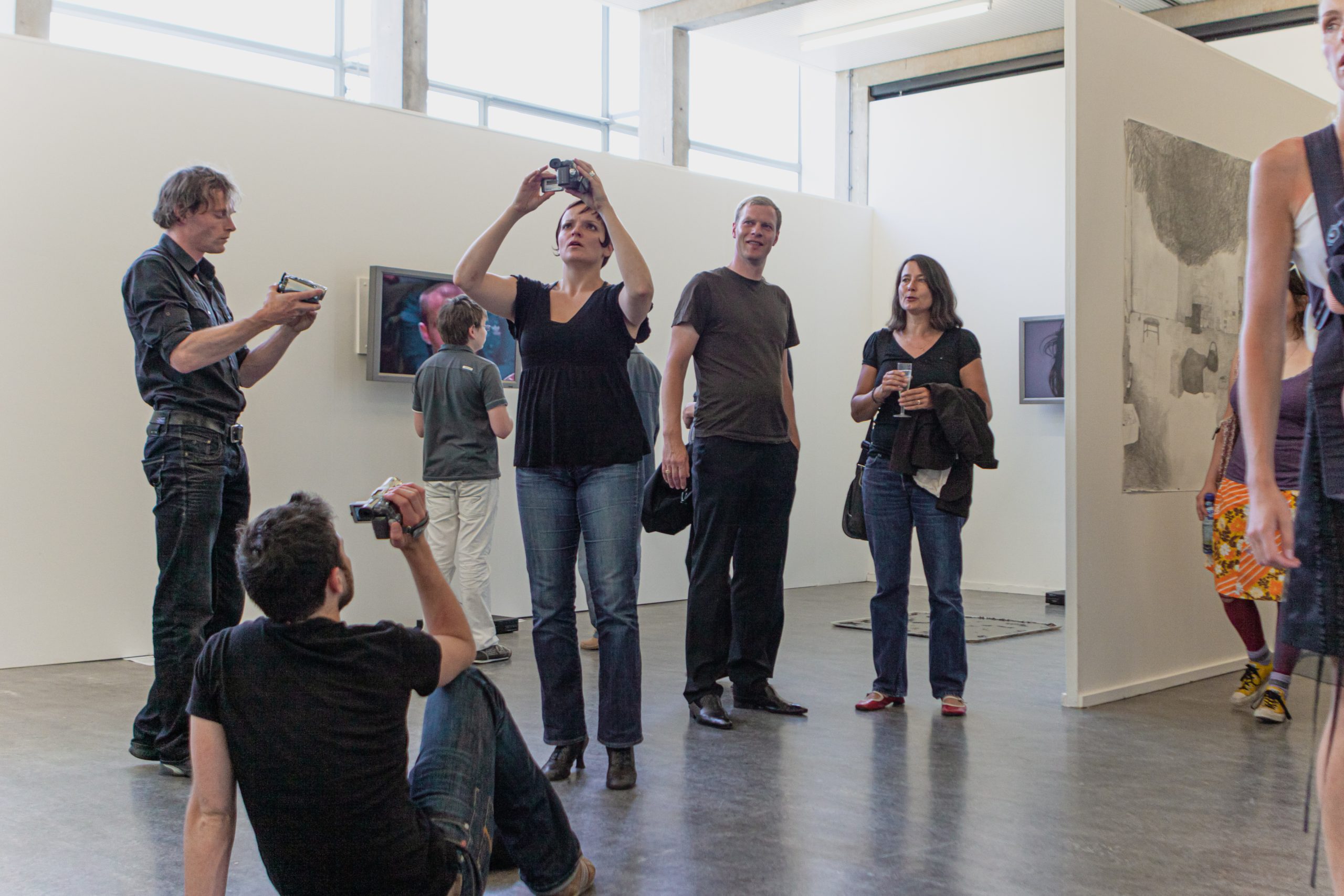 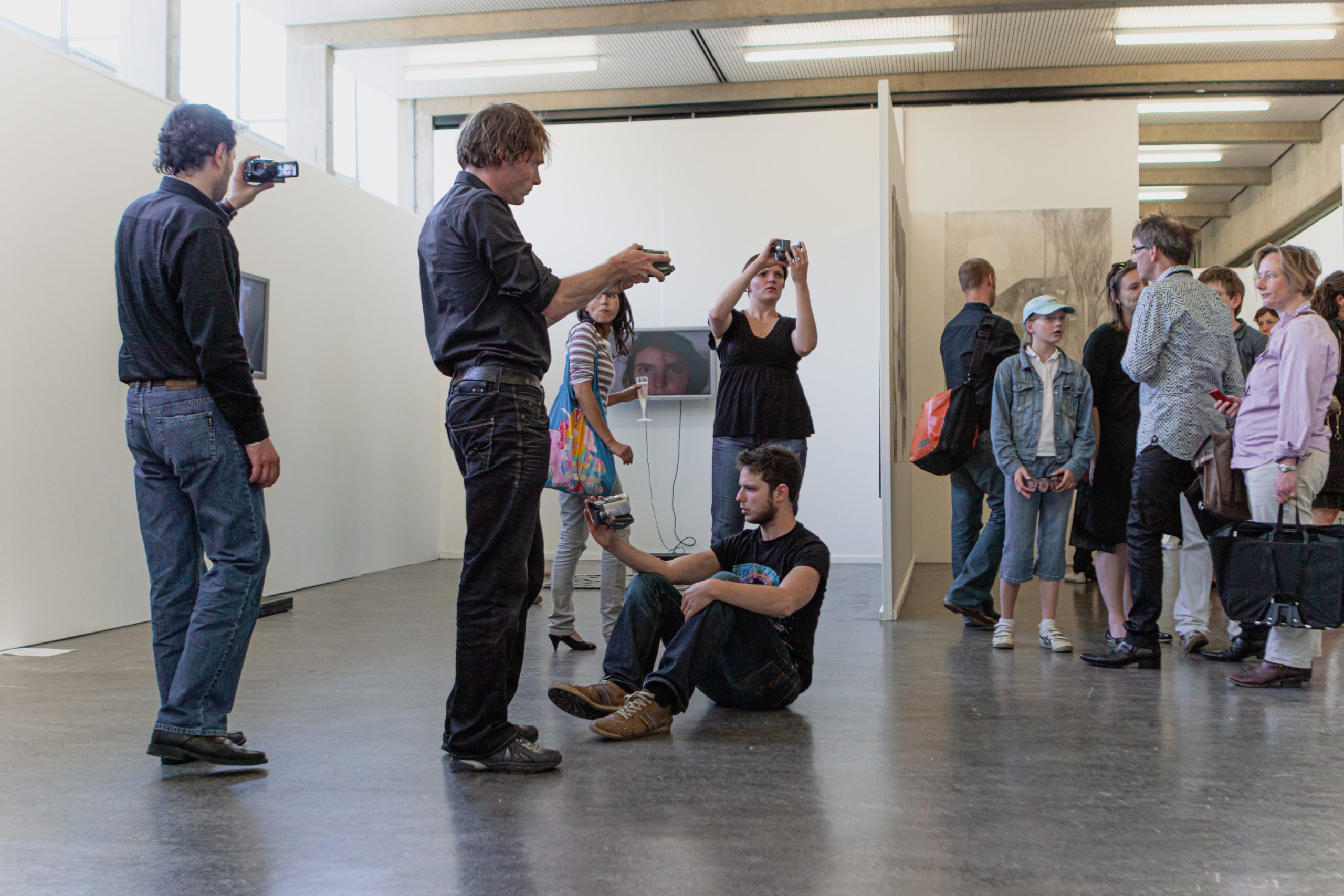 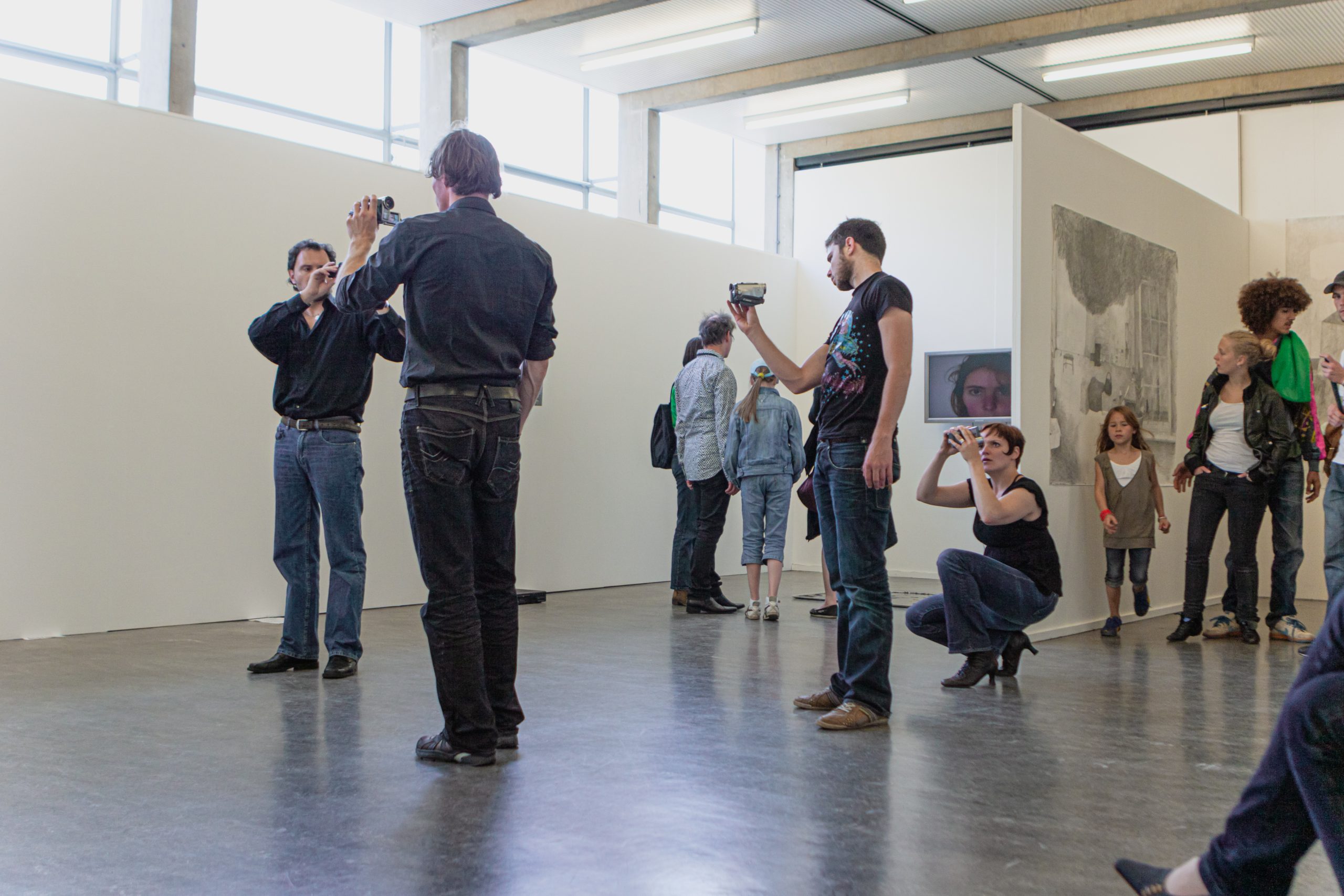 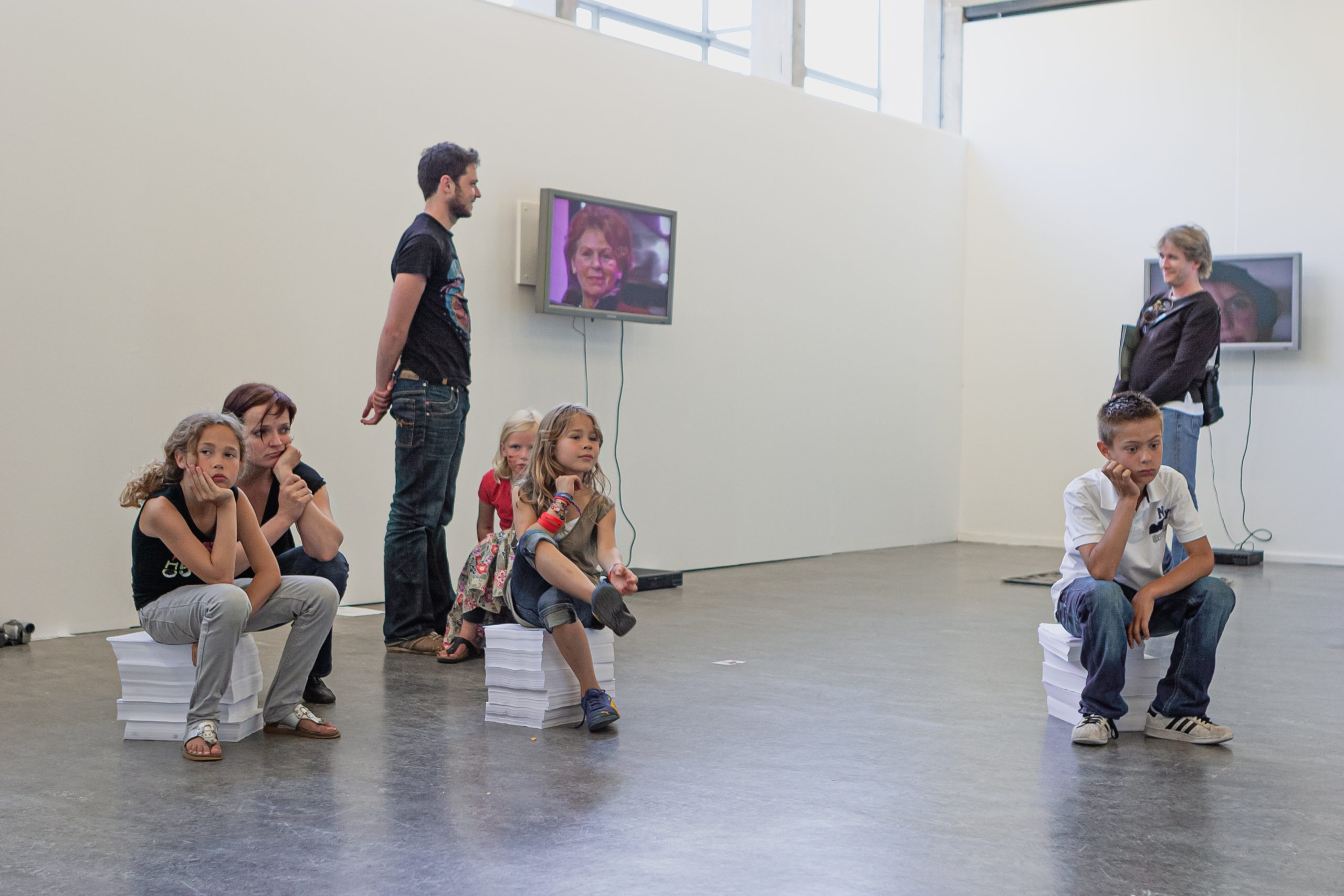 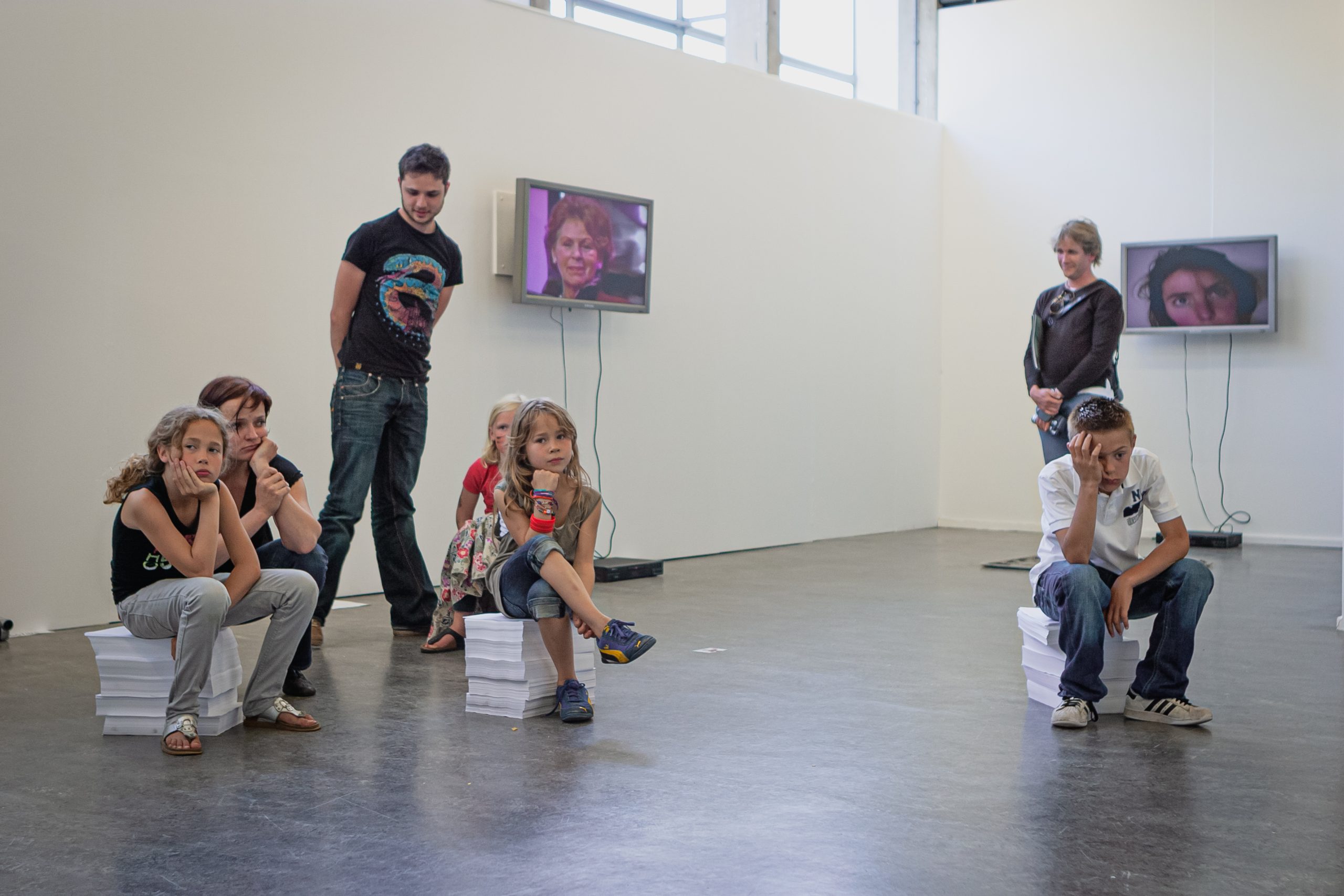 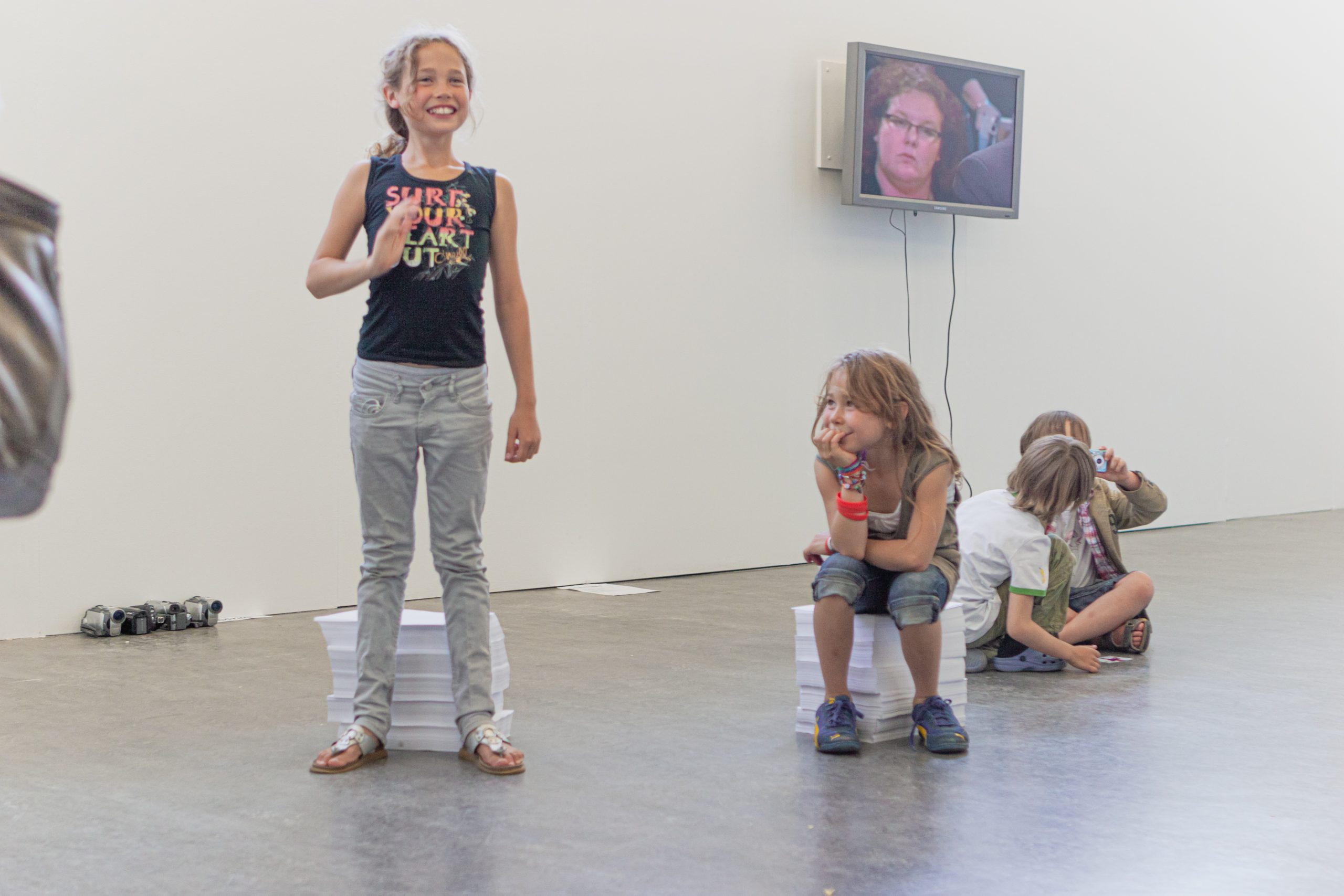 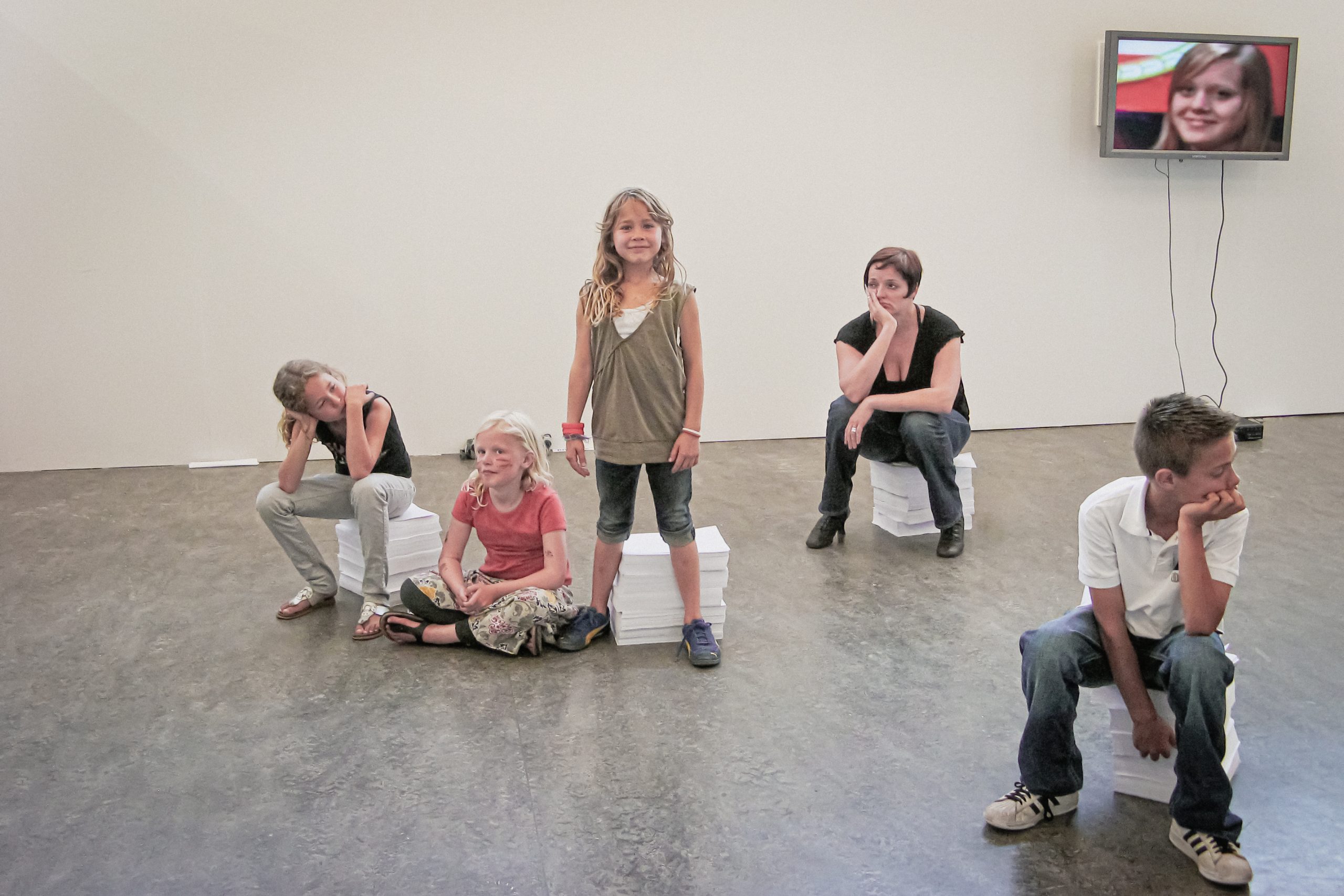 From the series Drawn Move